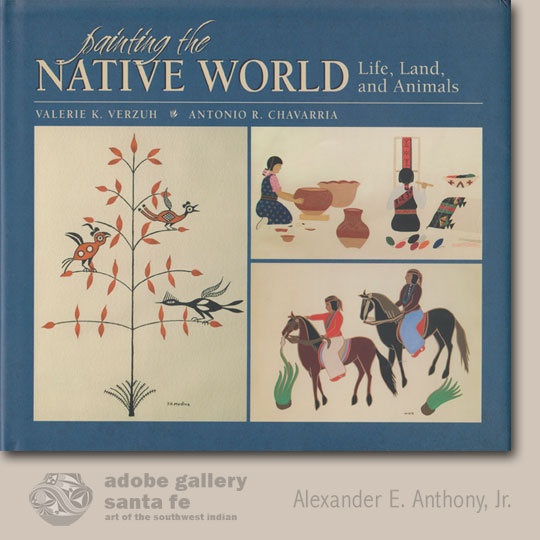 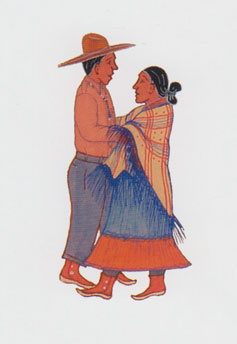 This small book features beautiful color plates from the collection of the Museum of Indian Arts and Culture.

“In the early twentieth Century, Native American artists began exploring artistic practices outside their utilitarian and ceremonial crafts.  Having been recently introduced to Anglo American media—pencil, ink, and watercolor—Native artists gravitated to the expressive quality of painting and drawing.  The Native American Fine Art movement emerged, characterized by flattened compositions, bold outlines, and a narrative style similar to that found in traditional Indian pottery.  From scenes of everyday life to depictions of nature, the works created by these artists became a valuable tool for the preservation of Native American traditions and philosophies.

“A major force in shaping the Native American Fine Art movement was The Studio at the Santa Fe Indian School, established in 1932 by noted educator Dorothy Dunn.  While most Indian schools of the time suppressed indigenous cultural practices—supposedly to foster assimilation of the students into white America—Dunn’s teaching philosophy ran the opposite way.  She abandoned European models and, despite resistance from the educational establishment, encouraged her art students to embrace ‘traditional modernism’—a synthesis of ancient American Indian and contemporaneous forms.  With a renewed cultural pride, many of Dunn’s students went on to become renowned artists who worked in the ‘Studio Style.’