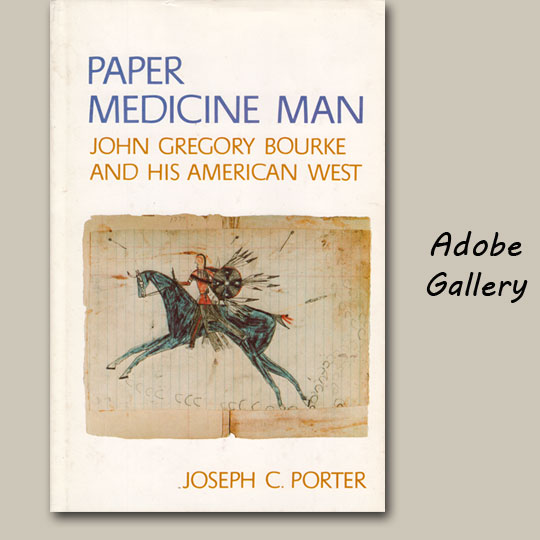 From the Jacket flap

“John Gregory Bourke was a U. S. Army officer who became an ethnologist, a military historian, and a prolific writer on the American West.

“Most of Bourke’s active military service was spent in the post-Civil War West.  After graduation from West Point he fought in the last-stand battles with the Sioux, the Northern Cheyenne, and the Apaches.  He was in General George Crook’s command when it ventured deep into the rugged Sierra Madre in an all-out effort to bring out the fugitive Chiricahua Apaches.

“These exploits proved a watershed in Bourke’s career. His many contacts with the Indians brought a growing interest in their lifeways and ceremonies.  His new concerns led him to the libraries of Washington, D.C. and to the Indians’ homelands in the West.  As he ranged from south Texas and Mexico north through Hopi and Zuni lands to Montana and Idaho and the Rockies, he observed and made extensive field notes.  The Apaches, intrigued by this strange white soldier who always seemed to be writing, began calling him ‘Paper Medicine Man.’  To the Sioux he was ‘Ink Man.’

“Bourke began publishing his observations and quickly developed a reputation as a careful and accurate reporter of Indian custom and ritual.  He became one of the select few military men invited to work with the U.S. Bureau of Ethnology.  He also became a staunch advocate of Indians’ rights in an age when they had few defenders.  His open concern for them eventually crippled his career.

“In the meantime, however, his published works on the west gained an international audience.  His achievements in ethnology earned him praise from such figures as John Wesley Powell, Theodore Roosevelt, Francis Parkman, and Sigmund Freud; Parkman called Bourke his heir apparent.

“Bourke also wrote firsthand military history.  He chronicled Crook’s exploits in the Indian Wars in the classic On the Border with Crook.  That work established Crook’s place in the military conquest of the West—and also Bourke’s place as one of the first historians of the Indian Wars.

“In this major work of biography, based on prodigious research and drawing on Bourke’s voluminous diary, Bourke emerges as a brilliant officer and scholar beset with troubling concerns about his government’s treatment of the Indians.  The author gives a sensitive, richly detailed portrait of an intelligent, active, compassionate man in the context of his times and accords Bourke his rightful place in America’s military, cultural, and intellectual history.  Paper Medicine Man is good reading—an adventure in itself.