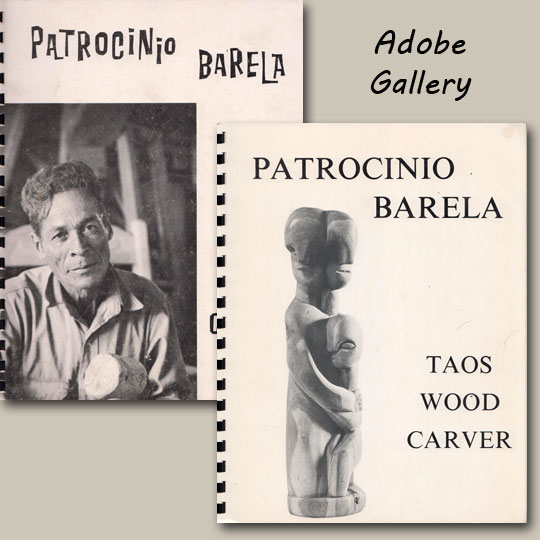 “This book has had a comparatively long but modest history, appearing originally in 1955 and published in 1962 by Taos Recordings and Publications.  The original author-publishers, Judson and Mildred Crews and Wendell B. Anderson had no aim beyond making as handsome a book of photographs of the work as was possible within their limited means.  In a community of sophisticated artists a kind of small underground cult which appreciated and collected ‘Barelas’ had evolved, and it seemed a good idea to make a book showing some of the works of this ‘primitive’ sculptor, along with the artist’s own explanations of them.

“Now from the perspective of twenty-one years we are able to observe certain changes that have taken place and certain effects the book has had here in the Southwest.  Barela died in 1964 in a night fire that burned his ramshackle studio to the ground.  A good artist’s death always makes a difference.  Suddenly everyone realizes how unique his products are: they are taken more seriously and rise in monetary value.  With all our technology another Barela sculpture can never be made because only one man could make them: Pat Barela.  People want them because they are inimitable.  That is part of the joy of art: it is the product of mysterious forces working in one unique soul.  Another change is that Barela’s own neighbors in the community now respect him whereas two decades ago he was considered a bit loco.”