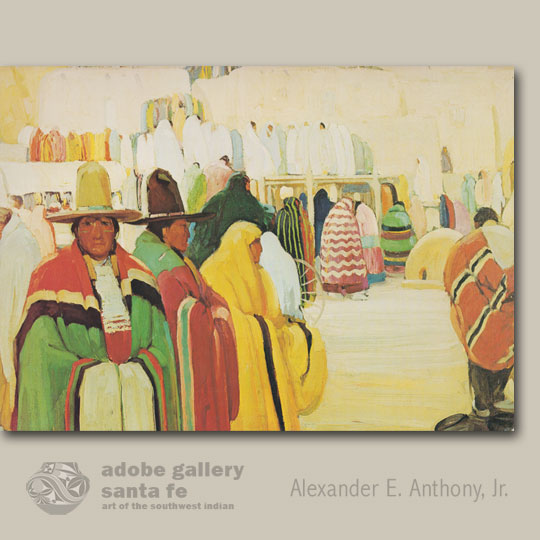 Condition: very good condition with evidence of the spine glue drying out.  The pages are presently secure but care should be taken when turning pages.

The exhibition was organized on a thematic basis rather than a chronological one.  Various sections were devoted to the diverse and unusual aspects of the Southwest—the land itself, the adobe architecture, the Indian ceremonials, and the genre scenes which explore the activities of the three cultures, Anglo, Indian and Spanish.

An important dimension was added to the exhibition by the photo-murals of James Milmoe.  Some of these photographic images reveal familiar landmarks such as the Church at Ranchos de Taos.  Additionally, examples of pottery, weapons, and blankets were added to the exhibit. In both instances, the photographs and the objects reinforced the impact of the paintings.

Paintings by 44 famous artists of Taos and Santa Fe were included in the exhibit.  Some illustrations are in full color and some in black and white.