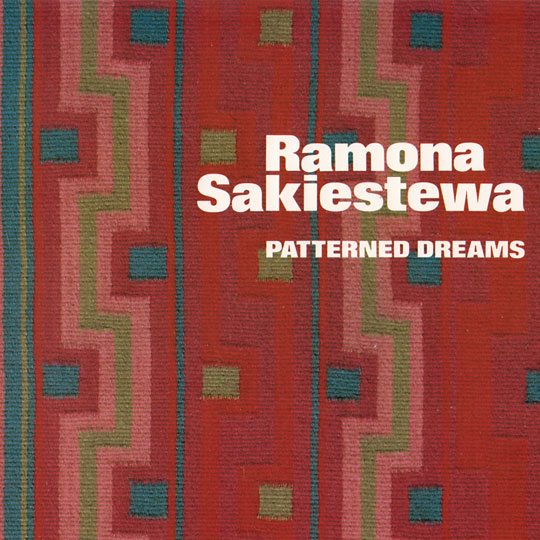 Published on the occasion of the exhibition at the Wheelwright Museum of the American Indian, Santa Fe, New Mexico, Summer 1989

Excerpts from the Original Press Release of 1989:

Santa Fe, NM: The Wheelwright Museum of the Native American is pleased to announce the exhibition opening of “Ramona Sakiestewa: Patterned Dreams: Textiles of the Southwest”. This solo collection of over twenty works in fiber will open in the Wheelwright’s Hastiin Klah Gallery on Sunday, May 28th at 1 P.M. and will continue through September 10, 1989. The exhibit will present the evolution of Hopi weaver, Ramona Sakiestewa’s work including traditional, contemporary, and commissioned pieces.

As a high school student, Sakiestewa taught herself to weave utilizing traditional Pueblo weaving techniques. As her skill grew, she even revived several Anasazi fabric weaves from the eleventh century.

In 1981 she opened her Santa Fe textile studio producing contemporary tapestries and rugs in a variety of editions. Inspired by her Hopi traditions, Sakiestewa’s designs reflect these motifs as well as those of other indigenous cultures.

The initial concept for the exhibit came from Ramona Sakiestewa, herself. Working with Wheelwright Museum’s Associate Director, Bruce Bernstein, and graphic artist and exhibit designer, John Garrigan, she envisioned the exhibit design simply as a “tour through her studio.”  Because of Sakiestewa’s ongoing interest and involvement with the color, form and spirit of the Southwest, she has incorporated images, work tools, and artifacts that demonstrate how an edition of weaving is first inspired, rendered, and finally how it evolves as one in a numbered series.

The chronological sequence of execution and the diversity of subject matter in Ramona Sakiestewa’s work have naturally determined the order of the exhibit. Beginning with the prehistoric inspired weavings, photographic images of early looms, a woven turkey feather blanket and twill weavings depict weaving as it was done then – functional clothing and or ceremonial.

Other segments of the exhibit include the “Southwestern Images” and the “East Horizon” series. Inspired by petroglyphs of the area, Sakiestewa has created hanging tapestries of ancient astronomical petroglyphs one would have found in Kiva murals of earlier times and the tempered colors used are in hues of gray, heather, white and charcoal.

The “Basket Dance” series has evolved from the color and motifs of Hopi wicker plaques, flat baskets that are given as gifts during ceremonial events. In Sakiestewa’s hands the circular baskets have been transformed to linear designs. While the “Facets” series is more contemporary in look art tapestries inspired by a blend of Southwest colors and landscapes. Indigenous architects and builders utilized the natural shapes of rocks to build structures that one can still see at Mesa Verde, Chaco Canyon and Canyon de Chelly. Native stonework combines with the intense colors of sky, plants and mesas in “Facets.”

Ramona Sakiestewa has garnered many top awards and fellowships for innovative designs in weaving and for historic research. These awards include the Katron H. Lamont Fellowship, Santa Fe, New Mexico, and the Southwestern Association on Indian Affairs Fellowship, Santa Fe, New Mexico.  In addition, she has received recognition from the Heard Museum, Phoenix, Arizona, and the Museum of Northern Arizona, Flagstaff, Arizona.

The tapestries of Ramona Sakiestewa reflect her career interest and commitment to bridging traditional and contemporary weaving expressions.