Selected Works of THE EUGENE B. ADKINS COLLECTION [SOLD] 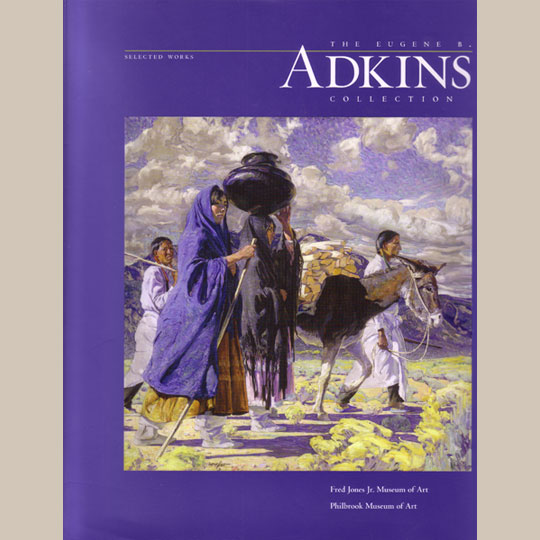 Published by The University of Oklahoma Press, Norman, 2011

A native of Tulsa, Oklahoma, Eugene B. Adkins (1920-2006) spent nearly four decades acquiring his extraordinary collection of Native American and American southwestern art. His vast assemblage includes paintings, photographs, jewelry, baskets, textiles, and ceramics by many of the Southwest's most renowned artists and artisans. This stunning volume features full-color reproductions of significant works from the Adkins Collection, some of which are reproduced here for the first time.

Adkins began collecting in the 1960s, when American southwestern art enjoyed a resurgence in popularity. His interest in the Taos Society of Artists led to his friendship with Kenneth M. Adams, the last artist to join the society. After purchasing one of Adams's paintings, Adkins went on to acquire works by other Taos Society and New Mexico artists. Ultimately his holdings encompassed works by such distinguished American artists as Maynard Dixon, Dorothy Eugenie Brett, Charles Bird King, Alfred Jacob Miller, Charles M. Russell, and Joseph H. Sharp. In addition, Adkins was a passionate and prescient connoisseur of Native American art and artifacts, and his wide-ranging collection of works by Native artists includes drawings by T.C. Cannon, pottery by Maria Martinez, and jewelry by Charles Loloma, all of which are represented in this book.

Along with its rich photographic sampling of works by Native and non-Native artists, the Eugene B. Adkins Collection offers informative essays by art historians and curators, whose areas of expertise coincide with Adkin's own interests. The volume also features a foreword by David L. Boren, President of the University of Oklahoma, and a preface by Randall Suffolk, Director of the Philbrook Museum in Tulsa, and Ghislain d'Humières, Director of the Fred Jones Jr. Museum of art at the University of Oklahoma. These two museums, which share a commitment to preserving Native American art and artifacts, are joint stewards of the Eugene B. Adkins Collection.

Part I. Art of the American Southwest

Chapter One: Time and Modernity in the Art of the American Southwest

Chapter Two: The Character of a Collection: Eugene B. Adkins and the Art of the American West

Chapter Three: The Aesthetic and the Ethnographic Photography of the American Southwest

Chapter Six: Materials of the Earth and Its People: Baskets and Textiles