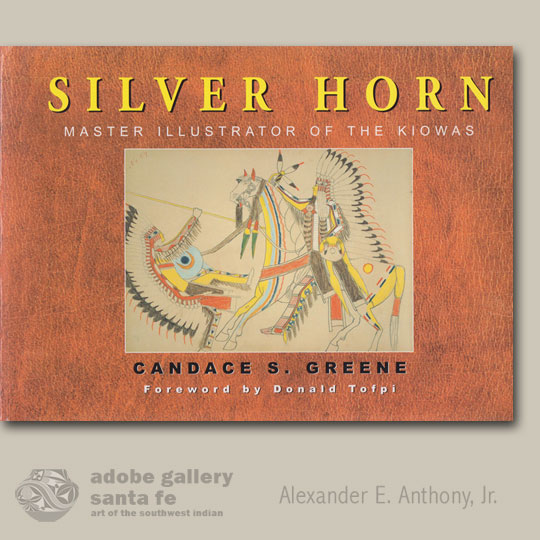 From the Slip Jacket

“Plains Indians were artists as well as warriors, and Silver Horn (1860-1940), a Kiowa artist from the early reservation period, may well have been the most prolific Plains Indian artist of all time.

“Known also as Haungooah, his Kiowa name, Silver Horn was a man of remarkable skill and talent.  Working in graphite, colored pencil, crayon, pen and ink, and watercolor on hide, muslin, and paper, he produced more than one thousand illustrations between 1870 and 1920.  Silver Horn created an unparalleled visual record of Kiowa culture, from traditional images of warfare and coup counting to sensitive depictions of the sun dance, early Peyote religion, and domestic daily life.  At the turn of the century, he helped translate nearly the entire corpus of Kiowa shield designs into miniaturized forms on buckskin models for Smithsonian ethnologists James Mooney.

“Born in 1860, when huge bison herds still roamed the southern plains, Silver Horn grew up in southwestern Oklahoma.  Son of a chief and member of an artistically gifted family, he witnessed traumatic changes as his people went from a free-roaming, buffalo-hunting culture, to reservation life, and, ultimately, to forced assimilation into white society. Although perceived as a trouble-maker in mid-life because of his staunch resistance to the forces of civilization, Silver Horn became, to many, a romantic example of the ‘real old-time Indian.’

“In this presentation of Silver Horn’s work, show-casing 43 color and 115 black-and-white illustrations, Candace S. Greene provides a thorough biographical portrait of the artist and, through his work, assesses the concepts and roles of artists in Kiowa culture.”