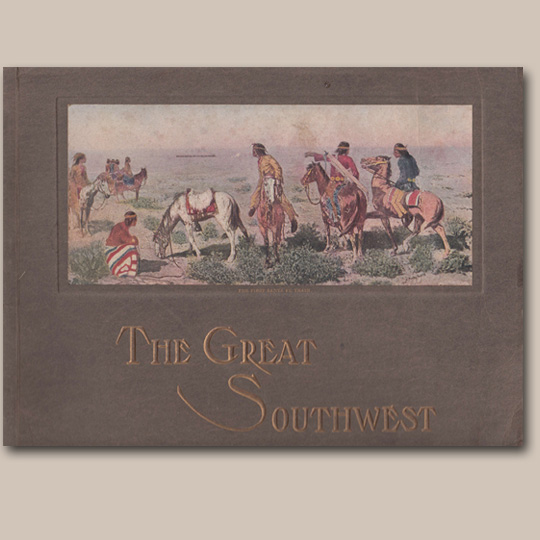 From the Introduction:  “Nearly four hundred years ago, from Old Mexico and Spain came hundreds of adventurers into the Southwest in search of riches, of lands to conquer, and of peoples to convert.  Among the first, in the year 1540, was Coronado, a Spanish conquistador, a daring, fearless soldier, a dreamer in search of wealth and power and honor.  With him came his lieutenants, Castañeda, Alvarado and Cardenas and Pedro de Tovar, and the padre, Fray Marcos, and many others from Spain, lured to this unknown land that contained fabulous riches and strange peoples.  Coronado led his small band into the deserts of the Southwest in quest of the objects of his dreams and with a hope of finding Quivera, a city of untold wealth.  In his wanderings he came upon the towns of Cibola, seven Indian villages, perched high on desolate mesas, where he found a people whose civilization was surprisingly developed.  Many other tribes of Indians he discovered, whose houses, several stories high, faced upon regular village streets, and who cattle and farms covered the surrounding hills and fertile valleys.  Plains and lofty ranges he crossed, but he found no riches.

“Then came the righteous men—the Jesuits and the Franciscans, who established many mission churches and first carried the Old World civilization into the Southwest.  These priests, from time to time, were martyred or driven out by the natives, but others came to take their place, and finally the missions, when their usefulness was most effective, were seized by soldiers of fortune who again drove the padres from the country.  This, then, was the setting and these the first characters in the story of the Southwest.

“Most of these incidents were already history two hundred and fifty years before the American Revolution and more than half a century before the earliest settlements on the Atlantic shores.  But it was from the hardy eastern pioneers that the march of westward progress was made that was to revive the achievements of earlier days.

“The ways to the West for these Americans led neither to wealth nor fame.  Every mile they traveled in their pilgrimage they wrested from vengeful enemies and then from the wilderness, buoyed up in their determination to succeed by the hope of winning homes and fortunes.

“Step by step tribute was laid on the waterways and on the open trails into the West.  The way once made, the restless tide of humanity spread over it with increasing rapidity.  From the Missouri River the Santa Fe Trail was the famous highway—the path of empire into the Southwest.

“Finally came the railroads—the greatest open trails—and with their coming time alone was required to reclaim the wilderness.

Condition: very good condition with minor acid burn on title page and back page from contact with covers.