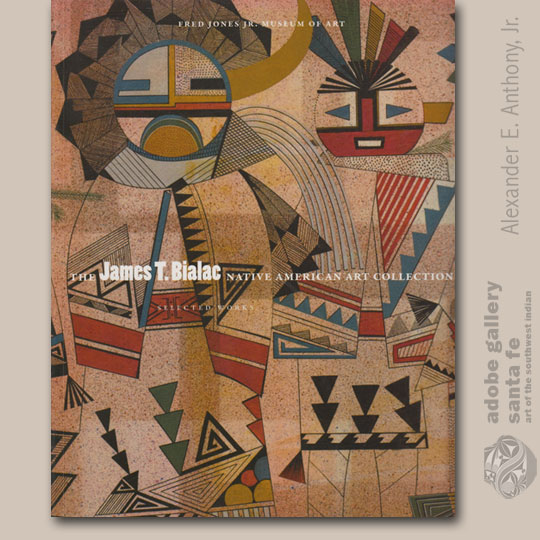 One of the most important collections of modern Native American art assembled by one individual, the James T. Bialac Native American Art Collection is an encyclopedic compilation of easel paintings and three-dimensional works.  Showcased in this stunning catalog, the collection comprises approximately four thousand items, including drawings, sculptures, prints, kachinas, jewelry, ceramics, rattles, baskets, and textiles.

James T. Bialac began collecting art in the late 1950s, when he was a student at the University of Arizona School of Law.  It was then that he purchased the first of what would develop into a collection of more than one thousand kachina dolls.  In 1964 he acquired his first painting, Robert Chee’s Moccasin Game, and he went on to expand his collection to reflect the diversity of Native American art forms.  Inspired by his connection with other collectors, Bialac learned the importance of documenting, cataloguing, and preserving his collection.  In 2010 he bequeathed the collection to the University of Oklahoma, where the art will be displayed at the Fred Jones Jr. Museum of Art, as well as at other locations, including Bialac’s native Arizona.

The Bialac Collection represents indigenous cultures across North America, especially the Pueblos of the Southwest, Navajos, Hopis, and many of the tribes of the Great Plains. It encompasses such important and innovative artists as Fred Kabotie, Alfonso Roybal, Fritz Scholder, Joe Hilario Herrera, Allan Houser, Jerome Tiger, Tonita Pena, Helen Hardin, Pablita Velarde, George Morrison, Walter Richard "Dick" West, and Patrick DesJarlait, all of whose works is featured in this volume.