THE LITHOGRAPHS AND ETCHINGS OF E. MARTIN HENNNGS [SOLD] 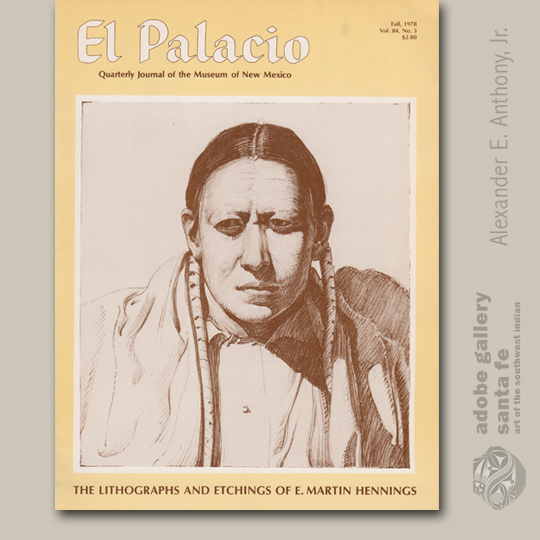 THE LITHOGRAPHS AND ETCHINGS OF E. MARTIN HENNNGS

The Special Section of this issue is on E. Martin Hennings (1886-1956) By Robert Rankin White

It was not known until 1976 that Martin Hennings ever produced any etchings, but during the preparation of this manuscript, four etching plates were found among the personal effects of the artist.  These plates were apparently etched in the early 1920s, and have remained unused and forgotten for more than fifty years. These etchings were never printed.

The paintings of Martin Hennings portray a feeling, a state of mind—about Taos, about Northern New Mexico and its diversity of peoples, and about the fascinating history of the early days of the art colony—a particular mystique which melded landscape, exotic peoples, and exceptional talent.

In many of his pictures, Martin Hennings has made time stand still for us, and he has through these let us see and understand what inspired and motivated him more than fifty years ago.