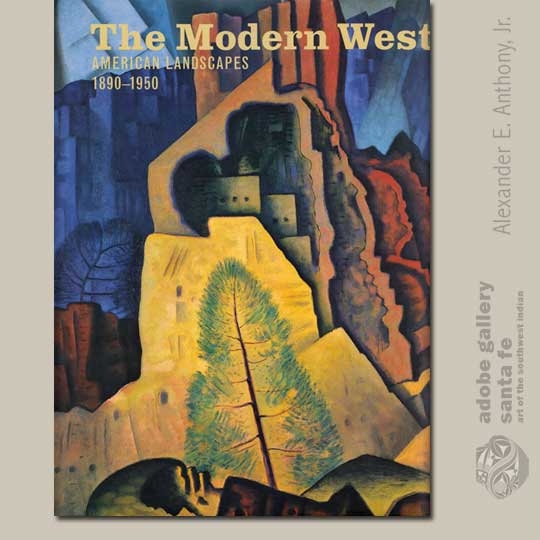 In association with The Museum of Fine Arts, Houston

“Although the term ‘Southwest’ was coined about 1803 to designate the states of Alabama, Mississippi, Tennessee, and Louisiana (in much the same way we now describe as the Midwest was originally the Northwest), the Southwest did not acquire its present contours until the late nineteenth century.  Journalist Charles F. Lummis claims to have introduced the term, but what effectively put it on the map was the railroad, specifically the Atchison, Topeka, and Santa Fe.

“Few visitors who traveled to the Southwest for the first time in the late nineteenth century, specifically to New Mexico, failed to be astonished or affected by the dramatic landscape and climate of The Land of Enchantment, as the state is now officially known.  In the 1880s the railroad was building lines in the area and heavily promoting them, making it easier for visitors to reach and explore the high tableland. By the 1890s, New Mexico began to cast its spell on Anglo-Americans at the same time that new aesthetic ideas were being aligned with the geography and optical sensations of the near and the far associated with the region.”

The Southwest’s earliest influential interpreter was Charles F. Lummis, the Harvard-educated journalist who, in an effort to recover from malaria, walked across the country to California and was awakened by the beauties of the land, which he later championed as an editor. Other individuals who advanced the artistic and cultural aspects of the state were grouped as the Taos Society of Artists, which existed from 1915-1927.  One by one, the seven artists were lured to Taos by their fellow artists who praised the landscape, the air quality, and the Native American residents.

This book covers the development of the art of New Mexico from those earlier days to the late twentieth century.  It is beautifully illustrated with black and white photographs and beautiful full-color plates of paintings.