THE POTTERY OF SANTO DOMINGO PUEBLO: A Detailed Study of its Decoration [SOLD] 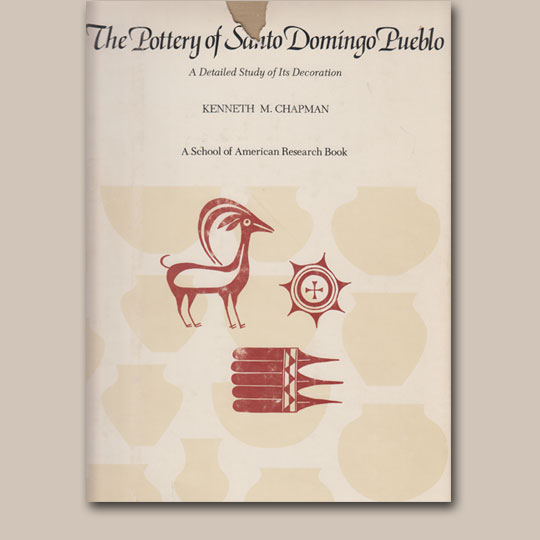 There are 79 plates of designs and 34 text figures.  This is a comprehensive study of pottery of Santo Domingo Pueblo.

Condition: the cover is soiled but is intact.  The text and plate pages are in excellent condition.

“The year 1923 saw the beginning of a movement of great importance in the preservation of the fast disappearing crafts of the Pueblos.  A small group composed largely of residents of Santa Fe, impressed with the need of prompt and vigorous action in order to save the arts of the Southwestern tribes for future generations of craftsmen, contributed specimens from their own private collections of pottery to form the nucleus of a projected museum collection, and to further its growth, effected an organization first known as the Pueblo Pottery Fund.  From this small beginning, through donations of specimens and funds from membership, the collection grew with great rapidity until the close of 1925 when the importance of the enterprise warranted its incorporation as the Indian Arts Fund.

“As interest and support for the Fund developed, it was soon apparent that a surprising amount of antique pottery still remained in the homes of Pueblo Indians and that it could be acquired at prices which, although notably higher than those of earlier days, were absurdly low as compared with the values set by dealers for comparable material from other cultures.”

Thousands of pottery specimens were collected and this study of the pottery of Santo Domingo approached completion in 1932.  Compilation of the information and arrangement for publication was begun and this study was published in 1936.  It is a complete analysis of designs employed in all phases of Santo Domingo pottery—Black-on-Cream ware; Black-on-Red ware; Black-and-Red-on-Cream Ware; and Polished Wares.

“Thirty miles southwest of Santa Fe, New Mexico, on the east bank of the Rio Grande, stands Santo Domingo Pueblo.  In 1920 Kenneth M. Chapman undertook the considerable research on Santo Domingo pottery that led to the writing of this book, first published in 1938 by the Laboratory of Anthropology, Santa Fe.  Determined to survey the pottery of pueblos near Santa Fe and to study the decorative art of one or more of them thoroughly, he selected the pottery of Santo Domingo Pueblo for detailed study because of its comparative simplicity, integrity, and abundance at the pueblo.

“This book opens with information about the forms and uses of the pottery of Santo Domingo Pueblo; the technical aspects of production; the design elements, motifs, and arrangements; and some comments on the symbolism of various designs.  Over seventy plates are then given detailed explanation in text.”

“The pottery of the prehistoric pueblos of the American Southwest has long been known as one of the most remarkable aboriginal crafts ever developed in the New World.  Extensive excavations during many years have yielded thousands of specimens which, displayed in many museums of our country, present a wealth of source material for the study of form and design.

“During the past fifty years such emphasis has been placed upon the recovery of these buried treasures that but scant attention has been given to the equally valuable sources of design to be found in the pottery of the pueblos which have survived the Spanish conquest and are carrying on today as in centuries past.  Doubtless it was the lure of the unknown that has prompted so much digging, but if the archaeologists had only realized that the rarest of all Pueblo pottery is that of the two centuries following the Conquest, they might have diverted at least a part of their energy to ferreting out the remnants of the antique ceramics of each pueblo.  A mistaken belief that pottery making was influenced by contact with the invaders was long current among those who based their convictions on nothing more tangible than the wide variance between the pre-Spanish and the later wares of each pueblo.  The fallacy is now fully exposed, for Pueblo pottery of the past three centuries proves to be a normal development, in which scarcely a trace of European contact can be detected.”

In 1920, H. P. Mera undertook a survey of the conditions then existing in the nearby pueblos with the intent of undertaking a thorough study of the decorative art of one or more of them.  This extensive monograph is his report on the pottery of Santo Domingo, a project started in 1920 and completed and published in 1936. The report is loaded with drawings of designs found on Santo Domingo pottery of the time.  It is an excellent resource document. 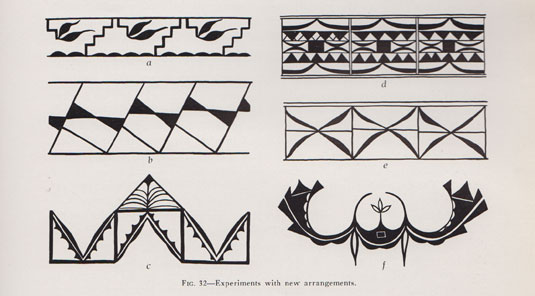