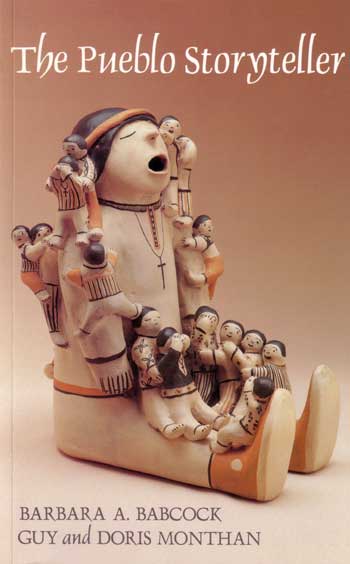 The Pueblo Storyteller: Development of a Figurative Ceramic Tradition

Provenance: from the library of John W. Barry, author of American Indian Pottery

The development of the Storyteller figure, so aptly recounted in the pages which follow, is a short course in the making of a tradition. As such, it is a story of individuals, with a cast of characters that crosses cultural boundaries. As the drama unfolds, these people express their own culturally determined biases, conduct their lives in an industrialized society, and respond to both their inner necessities and the exigencies of the marketplace.

A few individuals take center stage. First and foremost there is master potter Helen Cordero of Cochiti Pueblo. Her vision was an inspired one: drawing upon the venerable traditions of the past, aware of the unspoken but, nonetheless, strongly self-evident rules which guide those traditions, she chose to innovate. And - as is often the case for the artist who makes a personal quest, no matter what his or her background or audience - in that innovation she found herself. Helen arrived at pottery making at the time when she had fulfilled most of her duties as a mother, and in her middle age she both sparked a revival of figurative pottery and revolutionized it.

Alexander Girard's influence as a patron and fellow creator (he is himself a renowned designer and architect) must not be diminished. He bought Helen's first Storyteller, and his enthusiasm for her concise and individualistic style had a telling effect on her self-confidence. His suggestion for“improvements” on the Singing Mothers she initially sold him were taken to heart, and the assurance of future purchases by the Girards afforded Helen an artistic freedom rarely enjoyed by her peers. It was no surprise to discover in 1978, when the Girard Collection was donated to the Museum of International Folk Art in Santa Fe, that it contained 684 Cochiti ceramics, nearly all figurative, and nearly all contemporary. Within that group were 55 single and composite figures by Helen Cordero, including a commissioned Nativity scene of 115 pieces.

Yvonne Lange and Sallie Wagner also played leading roles in the development of the Storyteller tradition. In 1972, Dr. Lange, then director of the Museum of International Folk Art, undertook the task of assembling a ground-breaking exhibition entitled “What Is Folk Art?” A portion of this exhibition investigated the various agents of change which affect the evolution of folk-art forms. One section specifically addressed the influence of individuals who, by virtue of their genius or commitment or downright single-mindedness, changed the course of a folk tradition. In planning for this section, the museum enlisted the aid of Sallie Wagner, a long-time collector of American Indian art and herself such an individual, having sparked a revival of Navajo weaving and the use of vegetal dyes in Wide Ruins during the 1930s. On the museum's behalf, Sallie visited her old friend Helen Cordero as well as several of the other Cochiti potters who, by the early 1970s, had also begun to produce Storytellers.

Sallie acquired six examples of these potters' work, along with Helen's, for the exhibition, where they were photographed together (see Figure 11). Some eight years after Helen Cordero had fashioned her very first Storyteller for folk-art collector Girard, this “tradition” still seemed very new, and the work of her followers was still considered merely imitative. By 1986, that photograph seemed like a moment frozen in time, as we found ourselves confronted with a form which had evolved from the inspired vision of one master potter into an artistic and commercial phenomenon of impressive proportions. By the mid-1980s, more than 175 potters throughout New Mexico in a variety of Pueblos had embraced this subject.

In the late 1970s, three people were brought together by their interest in the Storyteller figure. In researching the art and cultural experience of Helen Cordero, Barbara Babcock, a scholar trained in literature and anthropology, turned her attention and insight to a number of questions addressed in the text of the present volume: What are the sources of this figurative tradition? How did the Storyteller develop and how does it fit into this earlier tradition? What is its meaning to the innovator, her followers, her market? These questions probe the very assumptions which underlie our definitions and understanding of ethnic and tourist art. Guy and Doris Monthan, collaborators on numerous publications on American Indian art since the late 1960s, brought years of knowledge and expertise to the project. Their interest in Storytellers grew from work on their 1979 book, Nacimientos, which dealt with a related aspect of figurative Pueblo ceramics, and they carefully documented biographical and artistic information and prepared the excellent illustrations (both black-and-white photographs and color plates) for this volume.

By joining forces, the three authors contributed and combined many years of research, documentation, and experience in order to produce this fine book. To those of us with a deep interest in traditional and ethnic art, the lack of information about the origins, use, and development of artistic traditions in this field is often a cause for considerable lament. What a pleasure it is, then, to bear witness to a tradition in the making in the pages which follow. For preserving the record, readers of this volume owe a sincere debt of thanks to the authors.