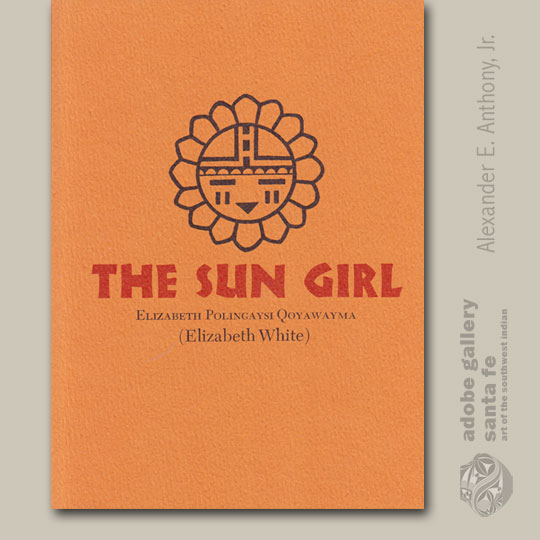 Published by The Museum of Northern Arizona Press, Flagstaff

Softcover, 1978, 48 pages, a facsimile of the first edition of The Sun Girl, published in 1941 by the Gillick Press, Berkley, California.  Illustrated with drawings by Hopi artist Komoki

Elizabeth Polingaysi Qöyawayma (Elizabeth White) first published this story in 1942.  It was told to her by a friend in her native village of Oraibi, Arizona, and as far as she knows, it is a true story.  Mrs. Qöyawayma told this story many times to her school children. They became so enthralled with it that they asked that it be repeated again and again, and they learned it almost word for word, correcting deviations from one telling to the next.  Finally, Mrs. Qöyawayma wrote the story down in the hope that all children would enjoy it.

Born to parents Fred (of the Kachina Clan) and Sevenka (of the Coyote Clan), Polingaysi Qöyawayma grew up in Oraibi, a village on Arizona's Hopi Reservation.  Her given name means "butterfly sitting among the flowers in the breeze. Qöyawayma's father worked for Mennonite missionary Henry Voth, who built a school in Oraibi and attempted to win converts to Christianity.

In 1924 Qöyawayma began working at the Indian school in Hotevilla, first as a housekeeper and later as a teacher. Unusual for the time, she taught bilingually, introducing subjects to students in their native Hopi and then transitioning to English. This caused friction with her fellow teachers, and with parents who preferred that their children be taught white language and customs exclusively, in order to be more successful in American society. She persisted, believing that Native American students were more receptive to concepts which were related in terms of traditional stories and legends.  She became a government employee after passing the Indian Service test in 1925, and continued to teach in Hopi and Navajo schools until 1954. After her retirement from teaching, Qöyawayma dedicated herself to music and art, particularly pottery. She created a unique style, using pink clay with raised symbols such as corn and Kokopelli figures. Her nephew Al Qyawayma is a successful potter and sculptor.

Elizabeth Polingaysi Qöyawayma (Elizabeth White) was born in 1892 and passed away in 1990 at age 98.