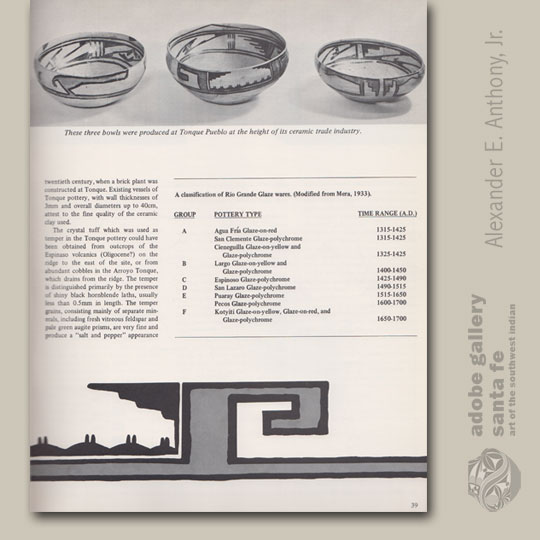 “For nearly two hundred years, a large prehistoric pueblo on the Arroyo Tonque, east of Bernalillo, New Mexico, was the site of a flourishing ceramic industry that dominated the economy of the Middle Rio Grande pueblos; particularly in the Santo Domingo Valley.  During the fifteenth and sixteenth centuries, the skilled potters of Tonque Pueblo supplied well over half and sometime nearly all of the glaze decorated pottery used in contemporary villages.

The Zia villages, which have one of the longest and most consistent records of pottery making in the Rio Grande, obtained almost one-third of their ceramics from Tonque during this period.  At Gran Quivira, eighty miles to the south, between twenty and thirty-five percent of the Glaze C and D pottery was imported from Tonque. Tonque pottery was also traded to more distant villages, including the Zuni pueblos 150 miles to the west, and to the Plains Indians to the east in Texas, Kansas, and Oklahoma.

Other articles in this issue:

Why the Palace of the Governors is not Part of the Smithsonian Institution by Richard B. Woodbury

La Jineta, The Art of Moorish Horsemanship in the New World by Charles C. Colley