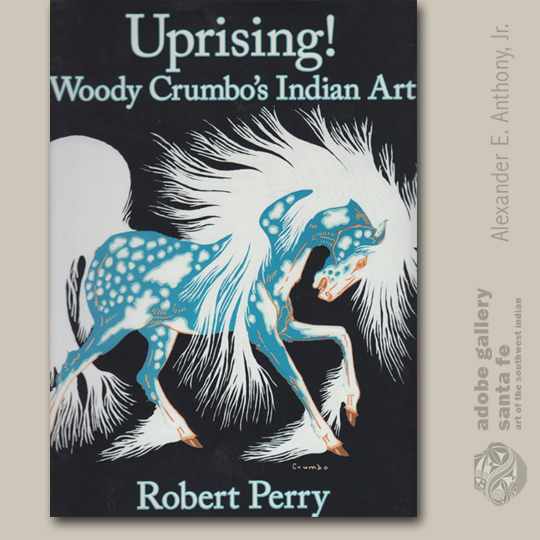 Chickasaw author Robert Perry’s interest in gathering and preserving elders’ stories from neighboring tribes prompted him to write this long-awaited biography.  Starting with a suitcase full of newspaper clippings provided by Crumbo’s widow, Perry traces Crumbo’s first flowering as an artist from his studies at Chilocco Indian School, where he befriended several Kiowas who taught him about their dances and regalia and introduced him to the traditional Kiowa cedar-wood flute.

“The book follows Crumbo from Chilocco to his studies at the University of Wichita and the University of Oklahoma, his years touring as an Indian dancer, and his position as director of art at Bacone College in Muskogee, Oklahoma

“Later, Crumbo collaborated with Taos artists, helped organize  Indian art exhibitions at the Gilcrease and Philbrook art museums in Tulsa, and directed the El Paso Museum of Art.  Uprising! Woody Crumbo’s Indian Art tells a compassionate and inspiring story as it fills a gap in the historical record regarding indigenous artists of the century just closed.”