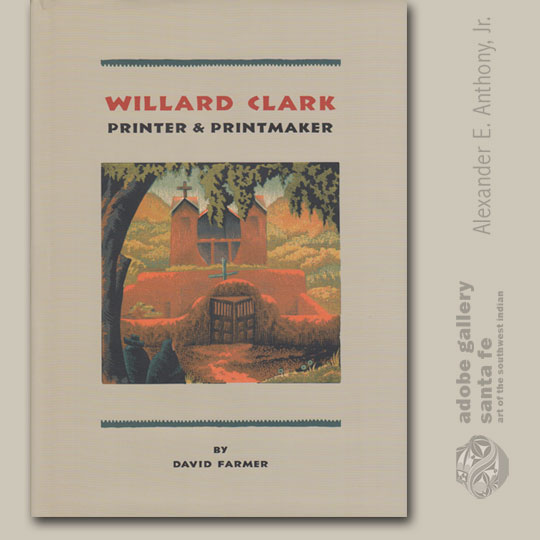 “Willard Clark: Printer & Printmaker is the story of the life and achievements of an accomplished twentieth-century American printmaker whose career in commercial printing and color woodcut illustration came to define the art colony of Santa Fe beginning in the late 1920s.

“The Bohemian life was in full swing when Willard Clark (1910-1992), an easterner who had spent some of his growing up years in Argentina, visited Santa Fe en route to California and decided to stay.  The year was 1928, and the man, not yet twenty, embraced the town that had all the elements of a thriving art colony. Isolated and self-sufficient, free of the conventions and standardization of American life elsewhere, it was the perfect place for a young artist in the company of writers, painters, and abundant characters to embark on a creative career.

“In 1942, Clark closed his studio, put down his wood carving tools, and took a job at Los Alamos National Laboratory, which supported his family for the next thirty years.  Then, in 1981, he was encouraged again to return to the studio. His charming wood-engraved images now spoke of old Santa Fe and a time when artists and craftsmen built their own adobe houses, hosted one another with bootleg, reveled in the ex-pat lifestyle, and made art every day.  From 1981 to 1992, Willard Clark again carved and printed his technically accomplished illustrations, eventually in service to his memoir in woodcut prints, Recuerdos de Santa Fe.”

This is an expanded edition of Willard Clark: Printer & Printmaker published in 2000 by Four-O Publishing