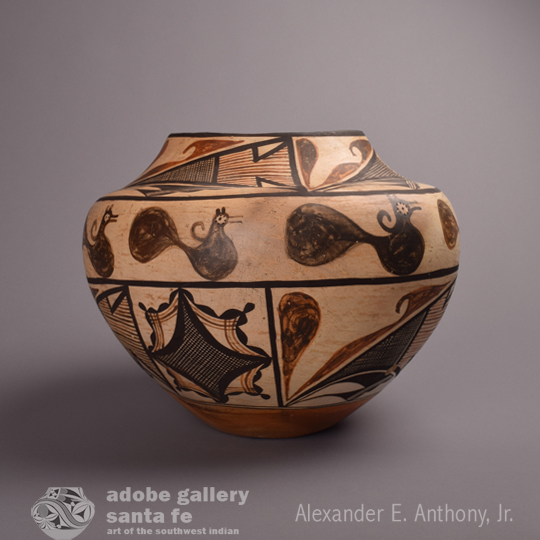 This early 1900s Acoma OLLA was decorated in its entirety in Zuni designs. For over a hundred years, Acoma potters have borrowed and reproduced Zuni designs. This trend seemed to be favorable in the 1890 to 1915 time period. Designs moved rather freely between Zuni and Acoma, no doubt due to their geographical proximity and probable historic connections.

Ruth Bunzel states that "Use of Zuni designs began at Acoma at the latter part of the 1800s, a time of increased tourism that probably stimulated Acoma potters to borrow and experiment to see what would be most marketable."

Use by one pueblo of another's design motifs has historical precedent. Rick Dillingham states "...before the Pueblo Revolt of 1680 and the ultimate Reconquest of 1696, many design motifs were shared among the pueblos of the Rio Grande and Acoma-Zuni area, suggesting broad cultural connections. Following the Revolt, designs began to become more locally differentiated, perhaps in response to the decreased geographical mobility of Indians fearing Spanish reprisals."

So we see a long-standing precedent for this most unusual and remarkable water jar of Acoma origin. All of the design elements on this jar can be traced to Zuni Pueblo. The jar was collected around 1920 and is in remarkable condition. There is one small spall that measures 1/2-inch in diameter near the bottom of the design area, and some areas of white slip abrasion, but the integrity of the jar is remarkable.

Condition:  very good condition with one small fingernail sized pop out near the base (see AL's finger below).

Provenance:  this Acoma Pueblo Historic Polychrome Pottery OLLA with Zuni Designs is from a gentleman in Albuquerque who obtained it originally in California.

Recommended Reading: The Pottery of Acoma Pueblo by Harlow and Lanmon