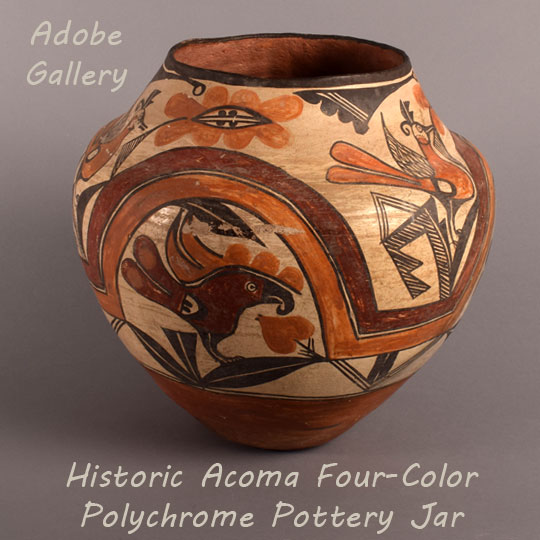 The Acoma Pueblo historic pottery jar appears to have been made between 1890 and 1900. It is slightly oversize for a water jar, but not significantly. The design was expanded from the red underbody to the top of the rim, without a dividing line at the shoulder. Prominent elements of the design are birds, flowers, and double rainbows—one orange and the other red. The birds below the rainbows are parrots and those above the rainbows are straight-beaked birds. The latter have not been identified to a specific species of birds, but they seem to always have beaks that are triangular, long, and parted. Perhaps they are roadrunners?

In typical fashion, the jar was covered in a cream slip, and the design painted in red, yellow, and black. Some of the colored designs are outlined in black and others are not. Scattered throughout the vessel are black designs of rain clouds, hachured bars, and split leaves. A wide black band outlines the rim, and a pair of framing lines define the lower panel. Below the framing lines, the base is colored with a red slip, and a wide red band overlays that just below the design. The charm of this late 19th century Acoma olla is in its somewhat primitive execution. It is a beautiful jar of large dimensions and good condition.

When we speak of pottery as being utilitarian, we overlook the meaning of such by the pueblo people themselves. Yes, the pottery may be in use as a utilitarian vessel, but it has meanings above that. Potters do not see their vessels as commonplace utensils. Otherwise, why would a potter spend hours or days carefully beautifying a water jar if it were considered only utilitarian. Each vessel was beautified because it was a sacred gift from Mother Earth.

To quote from The Pottery of Acoma Pueblo, referenced below, "Pottery was thought to have intrinsic life-giving powers, and vessels took on the attributes of whatever they held. For instance, water was thought to convey its sacred, vital, life-giving power to the jars that held it. Every vessel was believed to have a spirit, and the lengthy process of producing the vessel was accompanied by age-old prayers and songs. At the conclusion of burial rites, a bowl of water was broken over the grave of the deceased. Canteens filled with water were sometimes buried to give the person a ‘last drink.'" [Lanmon & Harlow, 2013:33-34]

The use of the terms "prehistoric, historic, and utilitarian" is not wrong or insensitive if we understand that they are just descriptive terms, and that we acknowledge that we understand the significance, beyond utilitarian, of vessels in use at the pueblo. We, as collectors, admire the beauty of a vessel with its elaborate designs, and, hopefully, appreciate the effort put into making it so.

Condition: There was a native piñon pitch repair at the time the jar was purchased in 1984. Subsequently, the pie-shape wedge that had been put back in with piñon pitch was again broken out from the rim. It had to be professionally replaced and was done so without piñon pitch.

Provenance: this Historic Acoma Pueblo Four-Color Polychrome Pottery Jar is from the collection of a resident of Santa Fe