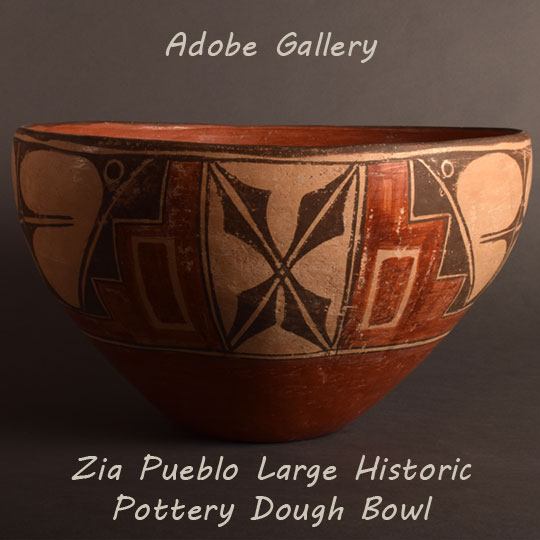 This is an exceptionally deep and historic dough bowl from Zia Pueblo, created most probably in the 1920s. This fine piece was coil-formed in native clay with the addition of crushed basaltic temper. The underbody was stone-polished over the bare paste in a warm brick red color. A narrow red band was wiped on as a dividing line between the bare paste underbody and the decorated upper body. The design field was slipped in a creamy white slip on which was prominently displayed the traditional design seen on almost every Zia Pueblo pottery dough bowl.

Dough bowls apparently were not made at Zia Pueblo before the late 1700s, possibly because of the difficulty in firing such large vessels or perhaps because smaller bowls served the purpose and larger ones were not needed.  The experience gained in making large storage jars for storage of dried foods and other necessities eventually paved the way for potters to experiment making dough bowls.  The design elements on dough bowls have persisted almost without change since the first ones were made.  This design was first developed on water jars during the San Pablo Polychrome period (1760-1820) and then used in dough bowls even into the present Zia Polychrome period.

It is obvious that this bowl was used extensively at the pueblo for mixing bread dough, as there is some dried dough on the exterior of the bowl. It is removable, should someone want it done, but I have chosen to leave it as evidence of utilitarian use. This is our favorite shape of Pueblo pottery, and we love the fact that it was a utilitarian vessel.

In their book The Pottery of Zia Pueblo Harlow and Lanmon speak to the age of this vessel. They indicate that the "pupils in the eye of Cadre figures" have been useful in dating dough bowls. The cadre figure referred to is the orange vertical figure, surrounded by cream color, and situated within the stepped orange element. (See photo above). This cadre figure is considered the older style, generally seen in dough bowls made between 1830 and 1870. We have chosen to date this bowl to circa 1920 even though it has the older cadre figure. It does not have the appearance of one dating to 1870 or earlier. Perhaps we are incorrect or perhaps a later potter used that cadre figure because her mother had used it.

Condition: particularly good condition, with only some evidence of slip abrasions here and there, which is expected from an object of this age.

Reference and Recommended Reading:  The Pottery of Zia Pueblo by Harlow and Lanmon RARE BOOK: POTTERY-MAKING IN THE SOUTHWEST [SOLD]
by