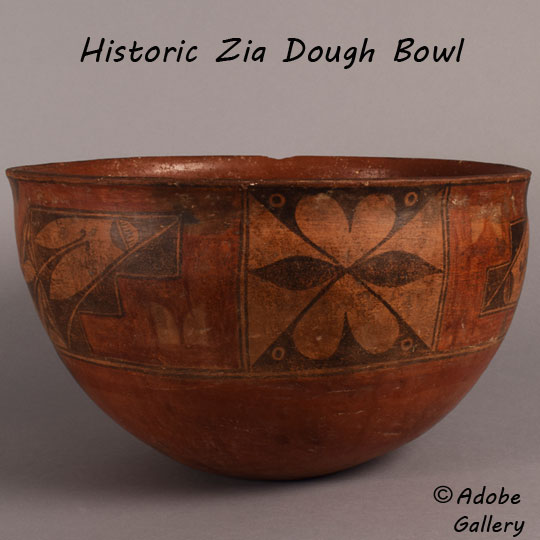 This historic pottery dough bowl was created in the 1880s by an unknown master Zia Pueblo potter. The bowl's form and designs are exceptional, and its heavy wear patterns from utilitarian use enhance the appeal of the unknown potter's work. We will most likely never know the specifics of this bowl's history, but we are grateful that it has survived and surfaced on the market, as it is an exceptional example of late nineteenth century pueblo pottery.

At ten inches in height by almost seventeen in diameter, this is a substantial vessel. Its hemispherical form is unique in comparison to the typical shapes, which tend to curve gently near the base before turning inward more sharply as they rise toward the rim. There are two deviations from the hemispherical shape—a rim that curves inward slightly before flaring out, and the flattened base which, interestingly, has a slight concavity in the center.

A single design band circles the bowl, covering just over half of the piece in traditional Zia Pueblo imagery. It contains two repetitions of a remarkable composition made of mirrored images and nearly symmetrical designs in black and red. The typical red base appears, reaching up to just below the middle of the exterior. The bowl's exterior has a rich, smoky look—the result of both a wonderful pattern of fire clouds and heavily patinated surface. The interior is similarly worn and similarly appealing, with smooth wear patterns, a few sharper abrasions, and what appears to be flour accumulated in the cracks and crevices.

Condition: excellent condition with visible wear from use. A crack circles about two thirds of the bowl near the base; it has been stabilized but not concealed.