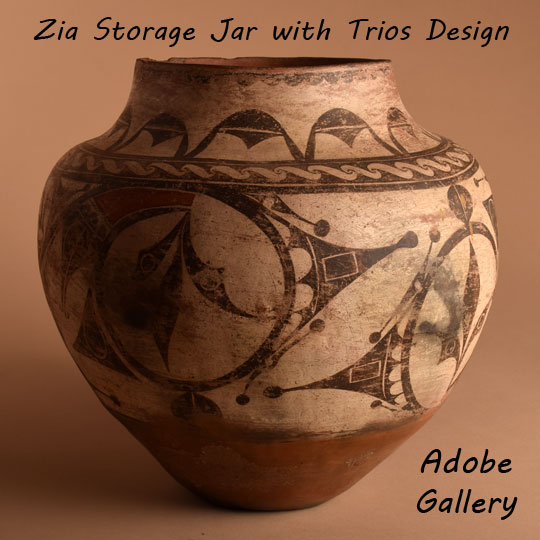 Jars from Zia Pueblo dating from 1820 to 1860 have been designated with the Trios Polychrome classification. Designs towards the end of this period began to show simplification of style. They retained the double line capped spirals without including some of the other embellishments. This design carried over into the following Zia Polychrome classification period, which is from 1860 to 1930.

During the early Zia Polychrome eras, the jars took on a narrower base and higher shoulder with extreme curvature toward the neck. That the Trios Polychrome design was carried over into the Zia Polychrome period is quite evident in this circa 1890 Zia storage jar.

The elements of this design style have been identified and named by Harlow and Lanmon. There are elements described as seedpods, capped spirals, nestled feathers, and trefoils. This carryover design from the Trios period was improved upon during the Zia period. The elements were more carefully applied and the layout more beautifully positioned.

According to Harlow, “…the volute motif is much neater and more elaborate in the Zia Polychrome. Second, the underbody is straighter with an angular in-curve at the base. Third, the shoulder—the area of greatest diameter—is above the mid-way point, and finally the underbody area below the red band is better polished than the Trios pottery. Overall, Zia Polychrome jars are more pleasing and precise in their execution than those of the earlier period.” (Frank and Harlow)

So, in this wonderful Magnificent Large Historic Zia Pueblo Pottery Storage Jar with Trios Design, one can truly see the best of Trios Polychrome design elements incorporated on the improved vessel shape of Zia Polychrome. This jar is imposing in size and most impressive in design. There is ethnographic wear consistent with what one would desire from a jar of this age. This jar is for the collector who desires pottery evidencing a history of ethnographic use. The condition of this jar is like that of many vessels collected by James Stevenson for the Smithsonian.