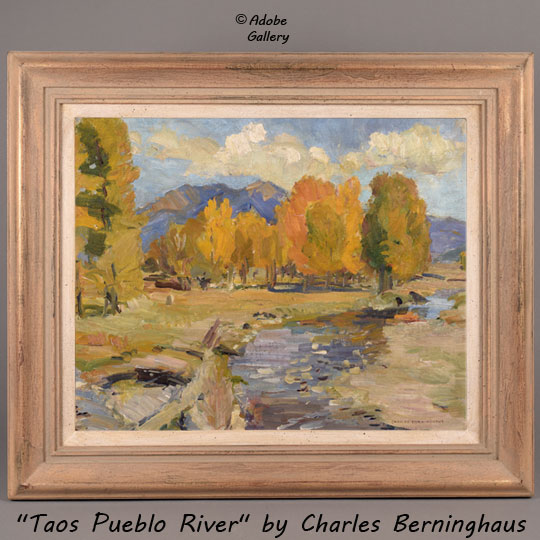 This original painting entitled "Taos Pueblo River" was created by impressionist landscape painter Charles Berninghaus. With this image, Berninghaus turned his eye toward the Rio Pueblo de Taos, a tributary of the Rio Grande. It begins in the Sangre De Cristo Mountains and flows about 33 miles, passing Taos and Taos Pueblo before joining the river in the Rio Grande Gorge.

Berninghaus' depiction finds the tributary moving gently through the high desert on a gorgeous fall day. It winds around from the right edge and passes through the center of the lower border, giving the impression that the viewer is wading in the water and looking upstream. A cluster of trees appears further in the distance, displaying the luminous yellows and oranges of autumn leaves. In the background, purple mountains rise into a cloudy but bright sky. The details are left out in favor of an energetic depiction of the larger essence of the scene. Berninghaus' brushstrokes are loose and expressive, creating an intriguing sense of motion throughout the image. One can feel the passage of time in the flowing water and shifting light of this wonderful landscape.

The painting is signed Charles Berninghaus in lower right. It is framed in a carved wood frame.

Charles Berninghaus (1905-1988) was an impressionist landscape painter. Berninghaus discovered art quite naturally because his father, Oscar E. Berninghaus, had already made a name for himself in the art world by the time Charles was born. Oscar first arrived in Taos in 1899 and was one of the six founders of the Taos Society of Artists, that famous and influential group that even today is known for the outstanding work its members produced. Charles attended St. Louis schools through high school, graduating in 1924, followed by art training at the St. Louis School of Fine Arts, the Art Institute of Chicago, and the Art Students League in New York. After spending some time in New York, Berninghaus moved to New Mexico permanently, where he continued developing the style for which he would become well known.

Provenance: this Charles Berninghaus Original Painting "Taos Pueblo River" is from the collection of a gentleman from Santa Fe