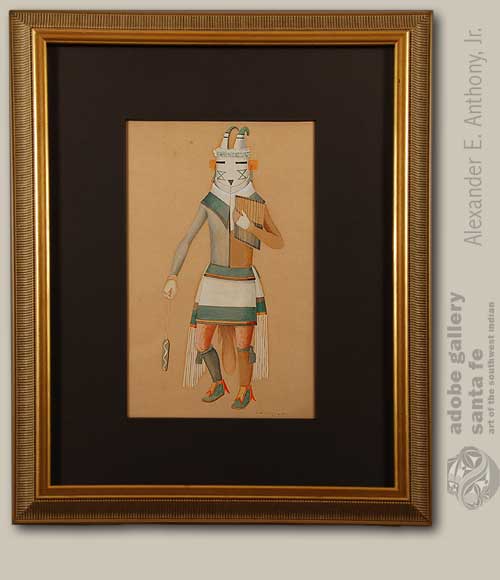 According to Colton in Hopi Kachina Dolls with a Key to their Identification, "Sotuqnang-U is the god of the sky, the clouds, and the rain, and is good, dignified and powerful." Colton lists him as one of 36 Hopi Deities—some of whom are represented as Katsinas and others not. When represented, he wears a white case mask with cloud designs on the cheeks. In his left hand, he carries a lightning frame and in his right hand, a bull roarer. The lightning frame is expandable and used to imitate the appearance of summer lightning. The bull roarer simulates the sound of thunder.

Because he is a Deity, and more elevated in rank than Katsinas, it is not unusual for him to be portrayed in less than an accurate manner. Some aspects of this painting may reflect the artist's desire to respect the dignity of the Deity and not portray him to the fullest extent.

About the artist, very little is published. He is listed in Snodgrass with only his name, birth date unknown, and that he was living and painting in 1930. The only collection mentioned is the Museum of the American Indian. The date of his active painting fits with the collection data of this painting as it is part of a collection from that decade.

The other artists associated with the collection from which this painting came all were contemporaries of Fred Kabotie and Waldo Mootzka and all seemed to have studied under Kabotie, so it is quite likely that Seekyesva did too.

The painting is in remarkable condition with only two small foxing marks to the left of the mask. It is signed in lower right.

Provenance: Original property of Dr. and Mrs. Harold Dunbar Corbusier who had a home in Santa Fe on Old Santa Fe Trail. It was passed down by them to their daughter, Frances Corbusier O'Brien, who, in turn, passed it down to her son, Dr. David S. O'Brien, the current owner. It has been in this same family for three generations.