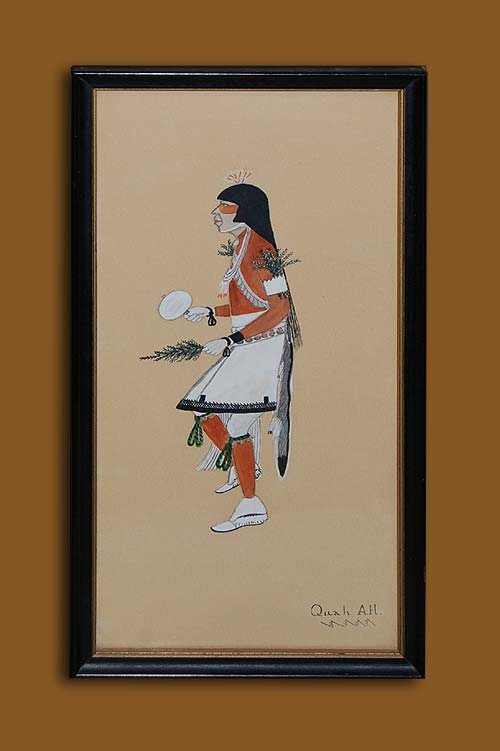 The image depicts a pueblo dancer in the traditional style with no ground plane and no background. In her paintings of dancers such as this she was able to make her dancers appear in motion rather than fixed in time.

Joe Herrera has stated that when his mother first started painting she signed all of her paintings with her Indian name . This lasted until sometime in 1915. A variation of this signature occured shortly before or at the time Tonita became pregnant with her second son, Joe H. Herrera, probably in 1917 or 1918. She then modified  and used the signature  separating and capitalizing the H in her first name, in honor of her second husband, Herrera. This was used until the death of Felipe Herrera in 1920. These signatures are rare as Tonita did not paint much at that time.

On the back of the frame is attached a newspaper article from The Literary Digest. Click on second image to see the article.

Item Provenance:
This item was presented in the Indian Pueblo Cultural Center's special exhibit “TIMELESS BEAUTY” in Albuquerque, New Mexico, January-August 2008. This exhibition celebrated the achievements and impact made by some of the most renowned Pueblo women artists on the preservation, exposure, and development of the indigenous and contemporary art forms of Pueblo people. Curated by the IPCC in collaboration with Santa Fe-based Adobe Gallery and the School for Advanced Research, “TIMELESS BEAUTY” showcased a collaborative collection of artwork created by these influential women.