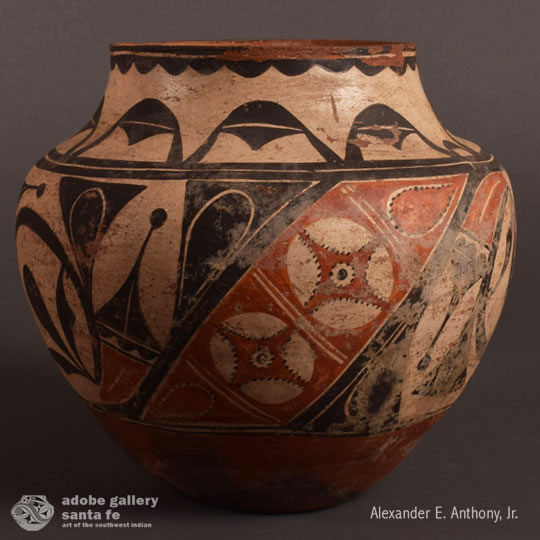 Overall, Zia Pueblo Polychrome pottery jars are more pleasing and precise in their execution than those of the earlier period. This jar combines the best qualities of Zia Polychrome with the finest design of the Trios Polychrome.

Although designations have been assigned to periods of production as shown above, it must be remembered that potters actively working at the time did not necessarily make changes simultaneously. A potter making pottery in 1855, during what has been designated as the Trios Polychrome period, might have continued her style until her death maybe in 1895. Technically, according to the authorities, she was in the Zia Polychrome period, although she, herself, was still making what she had learned to make in the Trios Polychrome designated period. The designation was not observed by potters, only by authorities studying pottery.

Several factors distinguish Zia Polychrome pottery from that of the Trios Polychrome period:

First, the volute motif is much neater and more elaborate in the Zia Polychrome wares.

Second, the underbody is straighter with an angular in-curve at the base.

Third, the shoulder—the area of greatest diameter—is above the mid-way point, and finally the underbody area below the red band is better polished than those of the Trios Polychrome period pottery.

Condition Report: this Zia Pueblo Historic Pottery OLLA with Trios Design is in excellent condition structurally, but there is some abrasion of the paint and some calcium deposit on the surface of the vessel from it having been used extensively as a water jar.

Talking with the Clay: The Art of Pueblo Pottery [Paperback Edition] [SOLD]
by Stephen Trimble