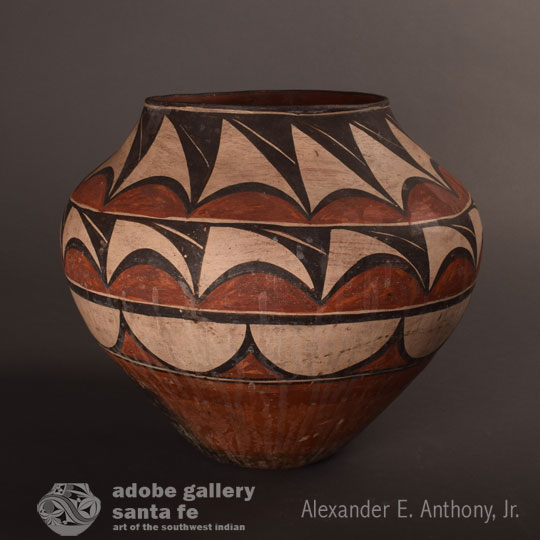 There are several features one can use for identifying and dating pottery—paste, decoration, vessel form, rim color, pigments, and red banding on the underbody. Another factor that is useful is experience, which is what most of us rely on rather than the technical facts. Zia Pueblo potters, like those from other pueblos, undertook changes in their wares to accommodate sales to outsiders. Starting in the mid-1800s, changes began creeping into traditional designs that, in some cases, were experimental, to create a vessel with visual appeal to a non-pueblo resident. Floral and geometric designs were successful adaptations that met with approval by buyers.

The period from 1840 to 1930 was filled with such individual attempts at expression. The vessel dates to circa 1900 and is an excellent example of an exuberant geometric pattern that is bold and expressive. Analyzing from the rim down, we start with large black split triangles superimposed over white triangles, the combination resting on orange semi circles that are outlined in black. This design fills the neck area of the jar. The same design is repeated in smaller scale in a narrow band at the shoulder. Below that band is another thin band reflecting a different design—large white semi circles spiked every few inches with black-outlined small red triangles. Below the design frame of the jar is a traditional wiped-on red band applied over the red underbody.

This historic pottery jar has an exuberant pattern that certainly must have met with success. It departed from the more traditional set patterns that were entrenched at the pueblo in favor of a freer expression by an individual potter. Pueblo potters must have enjoyed the freedom to express themselves in adapting to new designs. Collectors certainly approved. This jar is one that must have had a strong appeal as it is a strong and bold design that commands attention.

Condition: very good structural condition.  There appears to be calcium streaks as a result of use.  Similar calcium residue is on the interior.

Provenance: this Zia Pueblo Historic Polychrome Pottery Jar with Geometric Pattern is from a gentleman from Taos, New Mexico