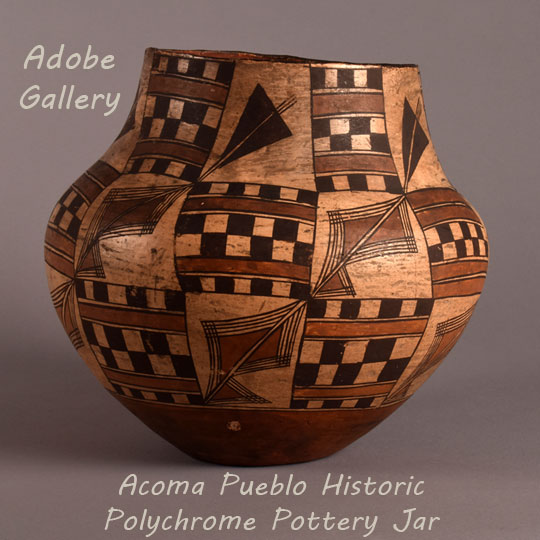 If ever there was a design that screamed “bold,” this is it.  This historic Acoma Pueblo pottery jar, except for the small area of red slip near the base, is filled to the rim with large square panels with checkerboard squares and red bars.  Alternating panels are rather subdued with geometric designs of split triangles—some in black pigment and some in red, outlined in black.  This amazing design is made more striking because of its lack of competing designs around the neck.  The firing process enhanced the age of the jar through fire clouds.

If the potter had divided the design concept at the shoulder, with one design on the body and another on the neck, it would not have been as powerful.  She was an artistic master.  The jar dates to no later than the 1930s.  A jar with a comparable bold pattern is identified as circa 1920-1925 in Lanmon and Harlow, page 463.

“Roughly 25 percent of all jars produced at Acoma between about 1800 and 1820 had checkerboards in their decoration.  The popularity of the motif reached a nadir of less than 10 percent around 1870, but checkerboards gradually increased in number between then and 1920, at which point they again appear on roughly 25 percent of all Acoma pottery jars.  [Lanmon and Harlow, 2013:263]

Provenance: this Acoma Pueblo Historic Polychrome Pottery Jar is from the collection of a gentleman from Kansas