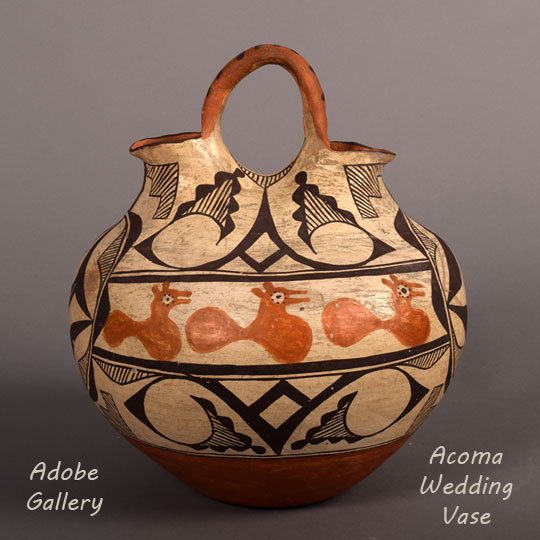 The globular body and short neck of the spouts are the highlights of the vessel construction.  The potter had an uncanny talent for style.  Her choice of designs is also indicative of her independence as she chose to use designs associated with Zuni Pueblo.  The orange birds are traditionally seen on Zuni pottery as are the capped spirals throughout the vessel.  Under each spout is a large medallion with a diamond design, also based on the Zuni medallion seen on jars.

It is not unusual to see designs associated with one pueblo occasionally used by potters of another pueblo.  Travel between pueblos exposed potters to the others' works and their designs.  There is a long-time tradition of travel between residents of Acoma and Zuni Pueblos.

It is interesting that none of the expeditions to Acoma Pueblo in the late 1800s collected a wedding vase.  This is a good indication that they did not exist at that time and probably did not appear on the market until the early 1900s, perhaps 1920.  It apparently is a vessel shape not used as Acoma but made for the marketplace.

Provenance: this Acoma Pueblo Polychrome Historic Pottery Pictorial Wedding Vase is from the collection of a client from New York