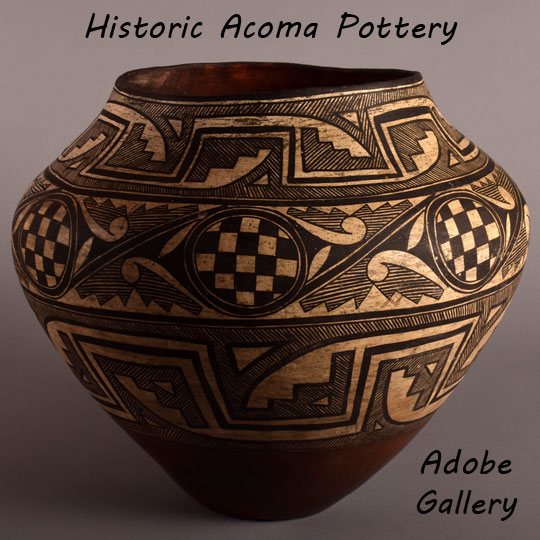 The best way to start the description of this Acoma Pueblo pottery jar is to simply say it is magnificent.  It is large in size and unique in design.  It originally was in the collection of Santa Fe dealer and collector Marti Struever, having been photographed with her in 1975. It is one of three historic jars in Marti’s collection when she passed away 3 years ago.  Information regarding it was presented in an insurance appraisal in 2018 in which the appraiser stated “According to Marty (sic) this olla was created by a literal marriage between a Zuni and Acoma family; the Zuni rainbird lines with the strong, high shoulders of Acoma.”

To start with the shoulder designs, we see circles with checkerboards.  According to Harlow and Lanmon (2013:263), checkerboards on Acoma pottery first appeared about 1780-1800 and on Zuni pottery shortly after 1750, so we see there is a history of the use of that design by potters at both pueblos.  Harlow and Lanmon also state that checkerboards appeared on roughly 25% of all Acoma jars by 1920.

Harlow and Lanmon (2013:265) comment that hachure lines are seen on some magnificent Kiapkwa Polychrome jars from Zuni, and on late-period Ako Polychrome and early Acomita Polychrome.  They state that after 1870, hachured elements became very popular with approximately 75% of all jars made at Acoma around 1910 having that feature, and that jars with hachured lines of this style were almost certain to have been made around 1890 and later.

With the documented information from the mentioned art appraisal and the comments by Harlow and Lanmon in The Pottery of Acoma Pueblo, it would be acceptable to state that this jar dates to 1890-1910 and is the work of a family of Acoma and Zuni artists.  The clay is of Acoma origin and the design has strong Zuni influences.

Condition:  vertical hairline crack has been stabilized.  There is no other known damage or repairs.

Provenance: this Acoma Pueblo Historic Jar with both Acoma and Zuni Design Influences is from the collection of a family from New Mexico