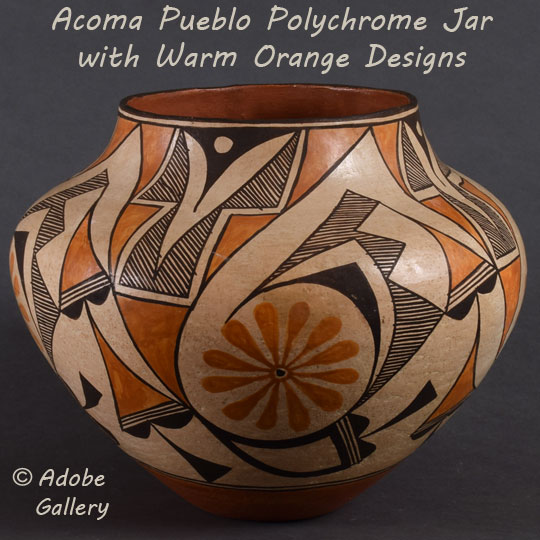 This polychrome pottery jar was made by an unidentified Acoma Pueblo artist. Judging by the look and feel of the jar, we'd estimate that it dates to the 1930s. She did not sign her work and the water jar does not have "Acoma," "Sky City," or "Acoma NM" written on the base as many slightly later examples do.

The unknown potter did a fine job crafting this vessel. The jar takes the shape of the typical Acoma water jar, with the one notable difference being its slightly smaller size. It is well balanced and nearly symmetrical, with slight variations in the rounded shoulder. A concave base similarly recalls earlier functional pieces.

The potter-or their collaborator, as is sometimes the case-successfully created a unique design using familiar elements. A long, loose triangle hangs down from the rim, with a stair stepped motif set just within its edges. As it nears its lowest vertex, it begins to curve softly to the right. Additional elements emerge from the vertex, continuing the curve and circling around a central orange flower. This design repeats four times around the jar's exterior, with additional elements linking each repetition into a smoothly flowing whole.

The jar's coloration is notable. Rather than the crisp white that often appears on contemporary pieces, this piece's slip has a cream-colored tone. Black and orange were used for the designs, as is to be expected, but the artist selected an unusually soft, warm orange. It works wonderfully with the cream slip, and the result is an incredibly attractive jar.

Condition: a curved crack winds along a portion of the jar. It has been stabilized and concealed by a professional restoration artist.

Provenance: this Acoma Pueblo Polychrome Jar with Warm Orange Designs is from a gentleman in Santa Fe