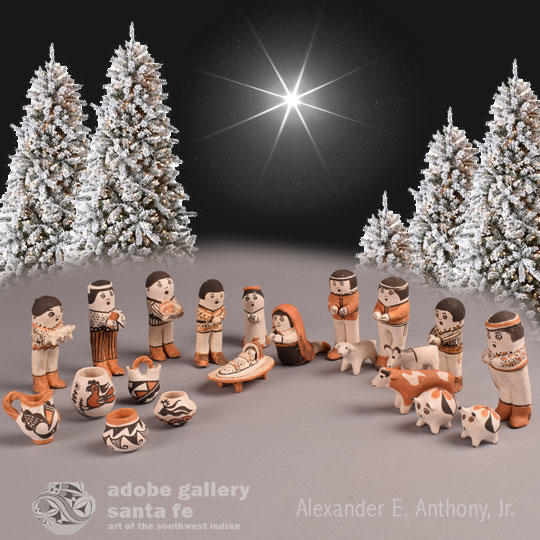 Artist Juana Leno was one of the finest potters of the 20th century at Acoma Pueblo. She quietly worked every day producing extraordinary pottery without seeking acclaim. She was a wonderful woman and very modest about her talent to produce such fine pieces.

Juana Leno (1917-2000) Syo-ee-mee (Turquoise) - formerly Juana Louis Vallo may not have achieved the fame she was due, but it was not because of the lack of quality in her work, but because she chose to remain quietly at home and not seek fame.

For years, I drove out to her home at Acomita and purchased pottery from her, and I was always charmed by how graceful she was and what beautiful work she produced. She was one of the few Acoma potters from whom I purchased. —Alexander E. Anthony, Jr.

It appears that this nacimiento began as a 15-piece set and was then added to by the previous owner.  The original pieces consist of the 4-piece Holy Family, an angel, three kings, four males and three animals.  Items added to the set include two pigs and five vessels.

The added pottery vessels are a wedding vase, a pitcher and three jars, each decorated in traditional Acoma vessel designs.  The two pigs are round and decorated with big flowers on their backs and they have curled tails.

Provenance: this Acoma Pueblo Pottery Nacimiento Nativity by Juana Leno is from a family in Colorado