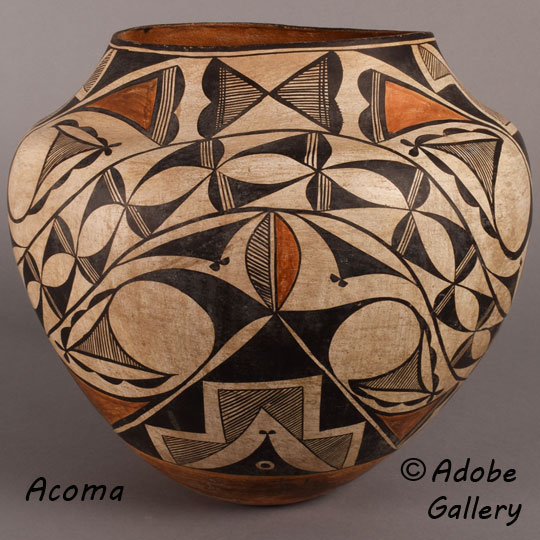 This polychrome OLLA, or pottery water jar, was created by an unknown Acoma Pueblo potter. At over twelve inches in height and nearly fourteen inches in diameter, this is a large and powerful piece. This is only about two inches larger than the typical functional OLLA, but that two inches is visually quite significant. This OLLA has a strong presence, due to both the size of the piece and the outstanding designs.

A wavy band circles the olla's exterior, curving twice from just below the midpoint to just above the shoulder. A continuous pattern of feather designs appears within the band, repeating unbroken throughout as it circles the olla. In the two areas in which the band dips down, triangular forms emerge from the rim. Zuni-influenced volutes emerge from the triangles' lowest vertices, widening out into the space between the band and the black triangles. Capped feather designs with orange interiors appear here as well. Hachured triangular forms appear within many of the larger elements, linking the various designs together and enhancing the feeling of movement.

In the Harlow and Lanmon book referenced below, there is an Acoma jar (page 263) with capped spirals, filled with fine lines, that was collected by Dr. H. J. Spinden in 1912, and another one that he collected in 1909.  It is therefore not unreasonable to set a date on this Acoma Pueblo jar of circa 1900.

Rather than adding additional designs, the potter chose to make use of the enlarged surface by scaling up a pattern that would also have worked on an average-sized piece. As a result, the elements are bigger and stronger, with precise composition and a generally crisp look. This is enhanced by the boldness of the orange and black pigments with which she made the designs. This is an impressive example of Acoma Pueblo pottery.

Condition: excellent condition with no restoration or repair

Provenance: this Large Polychrome Acoma OLLA with Zuni-Influenced Designs, circa 1900 is from a private Colorado collection