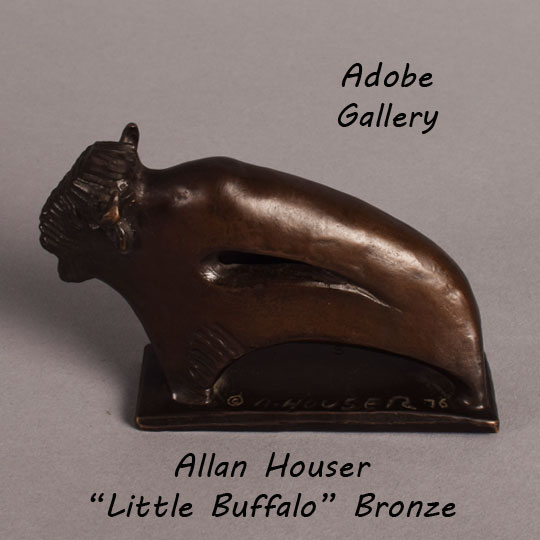 This bronze, appropriately titled “Little Buffalo”, was created in 1976 by legendary Apache artist Allan Houser.  The bronze was cast at Shidoni Foundry in Tesuque, New Mexico.  For many years, Shidoni Foundry was a significant part of Santa Fe’s art scene.  Their foundry ceased operations in 2017, but their gallery and large sculpture garden are still open to the public.

“Little Buffalo” is a fine example of Allan Houser’s skill as a sculptor.  Its head is a somewhat straightforward depiction; its body moves into more expressive territory as it curves down and away from the head.  A horizontal teardrop shape was carved through the middle of the piece, mirroring the form of the larger whole and giving it an interesting sense of motion.  Its dark coloration is beautiful, and certainly appropriate for the subject.  Despite its small scale, “Little Buffalo” projects strength and beauty.

The base of the bronze is signed A. Houser and dated ‘76.  The opposite side of the base is numbered 97/100 and marked with an SF, which stands for Shidoni Foundry.

Allan Houser (1914-1994) Haozous was a Chiricahua Apache painter, sculptor, teacher, and illustrator whose works are displayed in major museum collections around the world. Houser was born in 1914 near Fort Sill, Oklahoma and passed away in 1994.  A Warm Springs Chiricahua Apache, he was the great nephew of the famous Chiricahua warrior Geronimo. At the age of 20 he went to study at the Santa Fe Indian School under the tutelage of Dorothy Dunn. While he excelled at The Studio, he found it confining and constricting.

Today, Allan Houser is recognized as one of the most successful and accomplished Native American artists of the twentieth century. His works are included in the permanent collections of the Smithsonian Museum of American Art, the National Museum of the American Indian, and many other prestigious institutions.  His many accomplishments include receiving a Guggenheim fellowship and being the first Native American to receive the National Medal of Arts. Through his sculptures, his paintings, and his efforts as an educator, Houser’s voice remains one of the strongest in the world of Native American art.

Provenance: this Allan Houser "Little Buffalo" Bronze is from a private Arizona collection