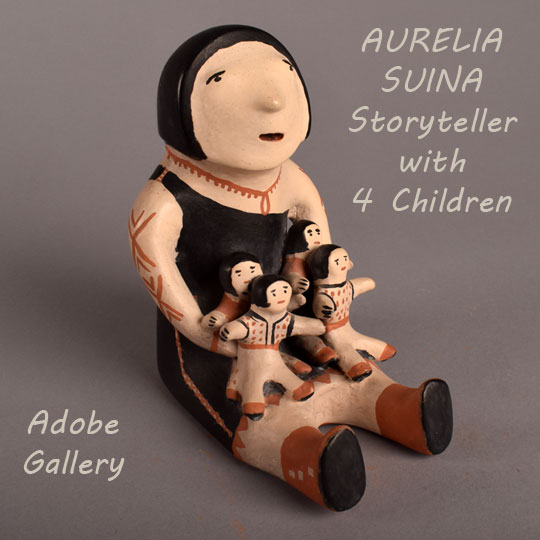 Cochiti Pueblo Potter Aurelia Suina made pottery figurines as early as the 1940s but made her first storyteller figurine around 1968, just a few years after Helen Cordero introduced storytellers in 1965.  This storyteller is a female with four young kids sitting on her lap, reminiscent of a grandmother with her grandchildren.  The children are facing away from her and all appear to be boys.  The storyteller is dressed in traditional pueblo clothing.  The sleeves of her blouse are decorated, and she is wearing a traditional turquoise nugget necklace with jaclas.

This figurine is pictured on page 37 of The Pueblo Storyteller, by Barbara A. Babcock and Guy and Doris Monthan.

This pottery figurine was acquired by Adobe Gallery in 1982, sold to a client, returned to us in 1993, sold again in 1994 to a client from whom we now have it back.  Aurelia Montoya Suina (1911-1997) reportedly made her first storyteller in 1968.  Aurelia Suina was the mother-in-law of Ada Suina and is credited with teaching Ada Suina the techniques of pottery production.