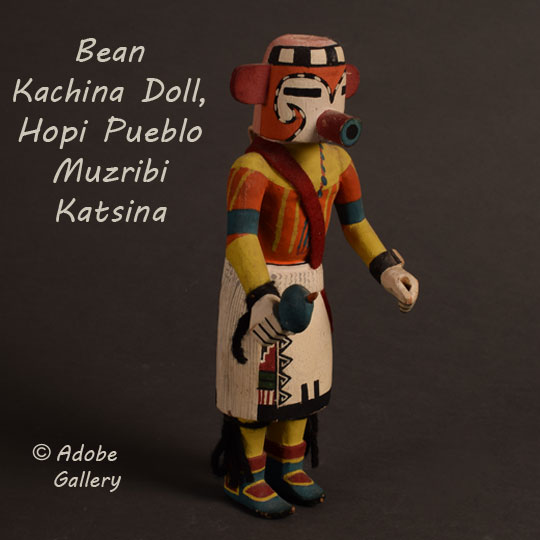 This Hopi Pueblo wood carving of Muzribi shows the most common presentation of the katsina. Sometimes, his color may vary from these, but these here are the most traditional. This carving is an excellent representation of this personage. It is in very good condition. He dates to circa 1960s.

The Muzribi or Bean Katsina, as one would expect, helps the beans to grow. He appears in the Hopi Pueblo Powamu ceremony in February and is accompanied by a female (Mana) Katsina who rasps for him while he dances. He is one of the Rugan classes of katsina and dances in the regular katsina dances. If he appears in the Mixed Katsina Dances, he usually is unescorted.

"The Powamu is one of the most important of the Hopi ceremonies. It occurs in February of each year in most of the Hopi villages. . . Undoubtedly the most important aspect of the Powamu ceremony is the anticipation of the coming growing season, with ritual designed to promote fertility and germination. To accomplish this the Powamu chief appears as Muyingwa, the principal deity of germination, and every male who has been initiated into the Kachina cult is expected to grow beans in the kivas. The growing of these bean sprouts gives the ceremony its popular name and offers omens for the success of the coming growing season. The ceremonial procession of the Pachavu Manas carrying these bean sprouts and the presentation of ritual bundles of them to the women and children during the height of the winter are tangible evidence of the presence of Muyingwa. [Wright, 1973:17]

Provenance: this Bean Kachina Doll, Hopi Pueblo Muzribi Katsina is from the collection of a client from California