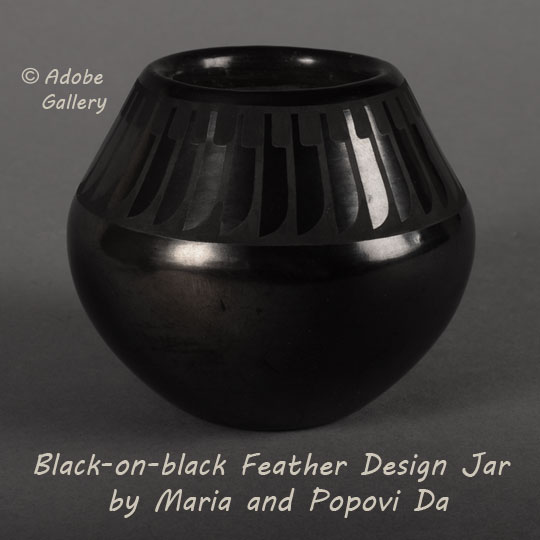 This Black-on-black jar was created by influential pueblo potter Maria Martinez and her son, Popovi Da. With collaborative pieces like this one, Maria would make the pot and a family member would apply the painted designs. Each of her collaborators seems to have had a distinctive style while still working mostly with traditional design elements.

Popovi Da's designs are admirably stylish, occasionally exploring abstraction or figurative work while maintaining a consistent rhythmic quality. When he did choose traditional patterns, he executed them with style and technical precision, occasionally making slight modifications that made the designs look a bit more modern. With this piece, interestingly, he created a fairly straightforward feather design composition. What sets the design apart from similar examples is the precision with which it was applied. Each feather is identical in size, and the group as a whole circles the jar beautifully.

The vessel itself is modest in size and quite attractive in the form it takes. This is a common shape for a piece in this style, but this example is particularly appealing. The quality of form matches that of the design, and the piece as a whole is striking. Maria Martinez (1887-1980) and Popovi Da (1922-1971) were San Ildefonso Pueblo artists. Starting in 1956, Popovi began collaborating with his mother Maria on her pottery, and the two worked together until his death in 1971. It was his intent to assist his mother and not to take away from her attention that kept him from making much pottery on his own. It is rare to find pieces signed solely "Popovi", without Maria's name. According to Richard Spivey, the first piece of pottery made solely by Popovi and signed only with his name appeared in 1962. Anita, Popovi's wife, said that Popovi would have made more pottery if he had had more time, but he was a pueblo governor, a leader of the tribe, a father, was running a store at the pueblo, and painting pottery for his mom. He also dug clay for his mom when his older brother, Adam, was not available. Maria and her descendants have come to be recognized as one of the most important families in the Native art world, and pieces made with Popovi are highly collectible.

Provenance: this Black-on-black Feather Design Jar by Maria and Popovi Da is from a private Colorado collection