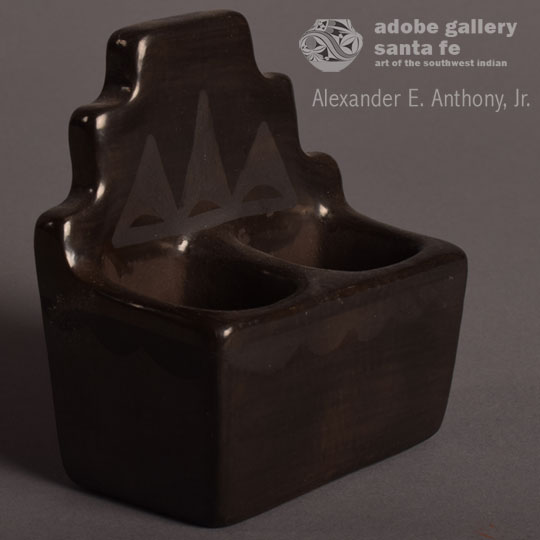 San Ildefonso Pueblo is famous for its blackware pottery vessels. Lupita Martinez was most known for her collectible black-on-black bowls, jars and bird figurines.  This black-on-black vessel is unusual in that it has two chambers.  Most terrace rim bowls have a single chamber.  What the potter had in mind when making this one will remain a mystery known only to her.

Terrace rim bowls are known to have originally been made only for ceremonial purposes and still are used for such occasions, however, they have become items being made now for collectors.  Ceremonial objects have long been sought by collectors because of their meaning to the Natives.  Collectors have, for decades, sought what was believed to be ceremonial as if that enhanced the value or collectability of the object.  We love the mysterious.

Lupita Martinez was the niece of Maria and Julian Martinez through her marriage to Anselmo Martinez (1909-1965), the son of Julian’s brother, Louis Martinez. I do not know if she was a full-time potter or an occasional potter.  She was, however, an excellent potter.

Provenance: this Black on Black Double Chamber Terrace Rim Vessel is from a private pottery collector