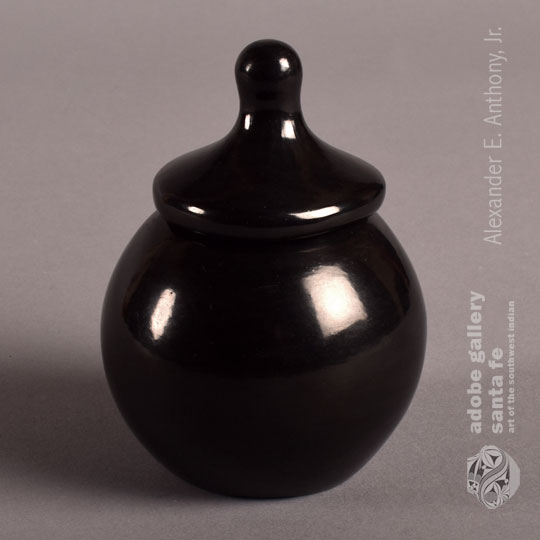 This small polished San Ildefonso Pueblo black polished jar with a lid was made by award winning artist Anita Martinez. She consistently won awards at the Santa Fe Indian Market and was featured in a number of exhibitions as early as 1974.  Anita Martinez was a daughter of Santana and Adam Martinez and the mother of Barbara Gonzales and Kathy Pino, both of whom are potters of note. Most of the pottery we have had in the past that was made by Anita (ca.1920s-1992) have been plain polished black without decoration, like this one.  Apparently she did not paint her pottery out of preference or for lack of ability. At any rate, it appears to be her style.

Lidded jars are not often made by potters as the lid must be made to fit properly and that sometimes is difficult to judge in that there might be some change in the firing that would make the two pieces not fit properly.  Anita seems to have perfected the process as we have had several of her lidded jars and they have always fit properly.

Provenance: this San Ildefonso Pueblo Polished Black Lidded Pottery Jar by Anita Martinez is from the collection of a gentleman from Illinois.