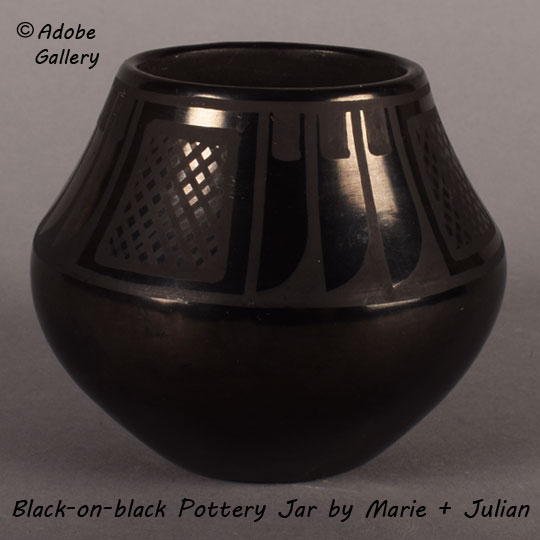 This Black-on-black jar was created by Maria and Julian Martinez of San Ildefonso Pueblo. It is a fine example of the collaborative work produced by this influential husband-and-wife duo. Maria did an excellent job with the pot itself, as did Julian with the exterior painted designs. The pot is in excellent condition, with a few tiny scratches—typical for works from this earlier period—but no notable damage or restoration work.

Those who are familiar with works in this style will recognize this vessel shape. It was produced often by the Martinez family, and eventually perfected. Julian's designs use a repeating pattern of three wide feathers followed by a rectangular element with diagonal cross-hatched lines. The rectangular form provides a welcome variation from the typical band of feathers. Julian's execution of this pattern was strong, and certainly well-suited to the vessel on which it appears. The bottom of the jar is signed Marie + Julian.

Maria Montoya Poveka Martinez (1887-1980) Pond Lily of San Ildefonso Pueblo is probably the most famous of all pueblo potters. She and her husband, Julián Martinez (1885-1943) Pocano, discovered in 1918 how to produce the now-famous Black-on-black pottery, and they spent the remainder of their careers perfecting and producing it for museums and collectors worldwide. Julian unfortunately passed away at a young age in 1943 at San Ildefonso. Maria and Julian's son Popovi Da (1922-1971) began collaborating with Maria on her pottery in 1956, following a period when daughter-in-law Santana had been assisting. Popovi and his mom worked together until his death in 1971. Maria's sister, Clara, spent most of her adult life polishing pottery for Maria. Clara was deaf, so Maria supported her with this work. Maria's grandson Tony Da also rose to prominence as a potter and painter. Maria passed away in 1980, leaving behind a large body of work and a significant legacy.

Provenance: this Black-on-black Feather Design Jar by Maria and Popovi Da is from a private Colorado collection