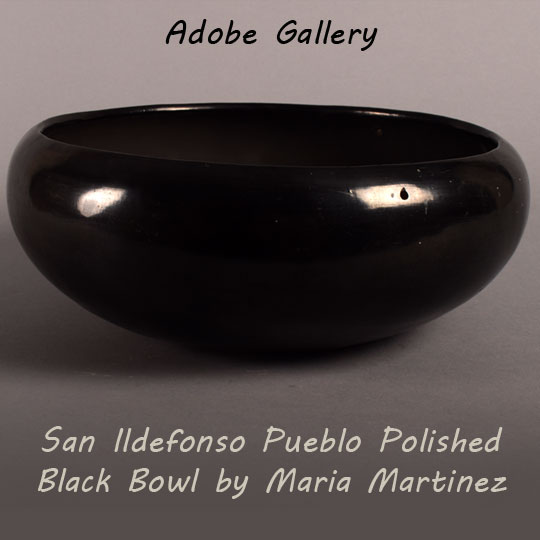 The story behind this large black bowl made by Maria Martinez is intriguing.  According to a notarized letter from The Indian Tree, Chicago, IL, formerly the art gallery owned by Martha Struever, most recently of Santa Fe, the owners certified their involvement with Maria Martinez and this bowl.

First, however, there is a mystery involved, and that is why there are three drilled holes near the rim of the jar.  I am sure these were not put there by Maria when she made it.  It is possible that the holes were drilled at the pueblo for displaying eagle down feathers while the bowl was being used for a ceremony.  If the bowl was used for a ceremony, there is no damage from the use.  The holes are not mentioned in the notarized letter previously mentioned.  So, we have no documented notes regarding the three drilled holes.

The certified letter (signed, dated, and notarized) from the original purchaser states:

“From March 21, 1921, and for the following two weeks, my husband and I spent our honeymoon in New Mexico at a ranch in Frijoles Canyon.

“After admiring an exceptionally beautiful bowl in a Museum in Santa Fe, the director directed us to the Pueblo of San Ildefonso where we found the potter who had produced the bowl that we liked so much.  The name of this potter was Maria Martinez, and she was already well known for the quality of her work.

“We acquired several vessels which we purchased directly from Maria.  Some of these pottery pieces are shown in the accompanying photographs that I have signed, attesting that these are the same vessels which Maria sold to us as examples of her work.”

Unfortunately, the original purchasers of this bowl are deceased, and the bowl was brought to us by their son.  The referenced letter was securely tucked into the bowl and is the only documentation we received.  The signed photographs were not found.  The letter is dated 1981 so it probably was executed at the time the owners were selling the bowl to Marti Struever.

This bowl surely is one of the earliest black bowls made by Maria.  That it was purchased in March 1921 also indicates that Julian was not yet painting matte designs on all of Maria’s work.  The earliest painted designs by Julian are listed as in 1919 and 1920, but the style was not one that Maria and Julian eventually settled on.

Mystery and intrigue sometimes add interest to an item as it gives us something to ponder and research.  The rest of the story may be revealed someday.

Provenance: this San Ildefonso Pueblo Polished Black Bowl by Maria Martinez is from the estate of the original purchasers in 1921