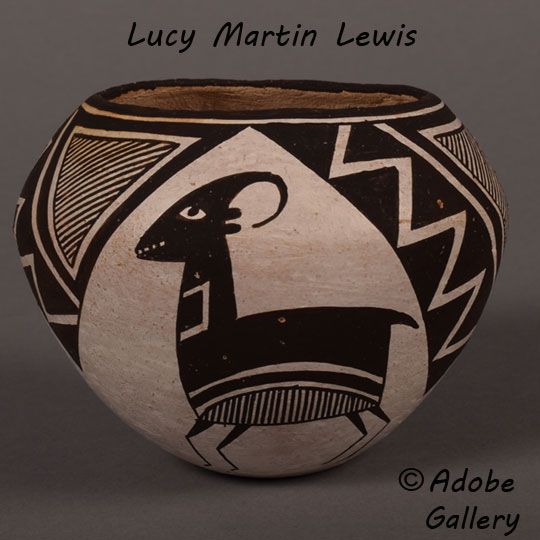 This black-on-white jar was created by Lucy Lewis of Acoma Pueblo. It's a smaller piece with a shape that is similar to that of a larger functional olla, with the exception of the neck—this smaller, market-ready olla's neck curves outward rather than inward. Regardless of where the inspiration came from, this is an appealing vessel.

The painted designs, which appear in the typical black pigment over white slip, are phenomenal. Three delightful Mimbres figures appear, rising from the base to about a half inch below the rim. The spaces in between the animals are occupied by large triangular forms, within which lightning patterns and smaller triangular elements appear. Everything comes together beautifully here, resulting in a strong reminder of why Lucy Lewis is so highly regarded. The bottom of the jar is signed Lucy M. Lewis, Acoma.

Lucy Lewis (1898-1992) was one of the most widely respected potters from Acoma Pueblo. Lewis followed pueblo tradition in every step of pottery production—offering prayers of thanks to Mother Earth for the clay, taking only as much clay as she needed, working the clay with only her hands, forming the vessel from coils of clay, scraping the walls with tools fashioned from gourds, painting the vessel with slips and paints made from clay and vegetal sources and, finally, firing the finished pieces in a handmade outdoor kiln. Lewis was born around 1898 and passed away on March 12, 1992. She spent nearly all her life atop the high mesa of Acoma Pueblo, making pottery since the age of 8. She is largely responsible for the revival of Mimbres Black-on-white pottery designs, which are more than 1,000 years old. She was famous, as well, for her exquisite polychrome designs and her fine-line and lightning designs.

Condition: excellent condition, a few very small areas of spalling, which is typical

Provenance: this Black-on-White Jar with Mimbres Animal Figures is from the collection of Bob & Louise Sluder, Dealers/Collectors active from 1955 to 1990