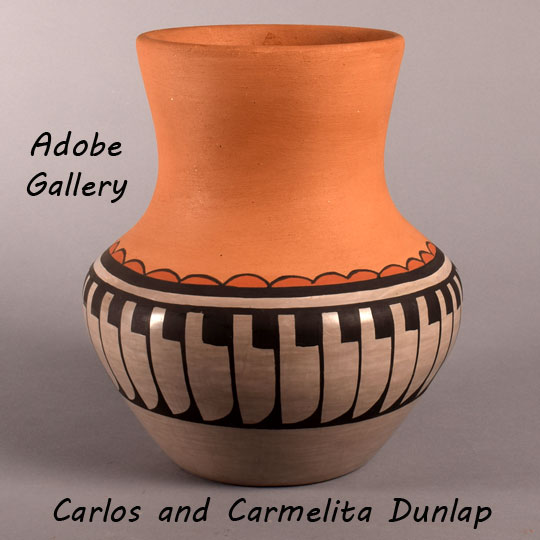 This large pottery jar was made by Carmelita Dunlap and her son, Carlos.  It likely dates to the late 1970s.  The earth-color jar was formed using micaceous clay—not to the extent of Taos Pueblo pottery, but clay with a small amount of mica.  The lower part of the jar was slipped in an off-white slip which was stone polished.  Over the white slip was painted eagle feather designs encircling the body of the jar.  At the base of the neck, a series of clouds were added in red slip and outlined with black.  The jar is co-signed by mother and son. Carmelita Dunlap (1925-1999) and her son, Carlos Sunrise Dunlap (1958-1981), collaborated on pottery for the short duration that Carlos worked with his mom, probably no more than 5 years. Carmelita primarily made pottery and Carlos painted them for her.  Since he passed away at age 23, their collaborative output could not have been numerous.

Carlos was a talented painter with a creative outlook for combining traditional and innovative designs.  His combination of the traditional eagle feather Mimbres design and the red-on-tan clouds juxtaposed on the natural clay is not a standard approach but one that Carlos created from his artistic mind.

Provenance: this San Ildefonso Pueblo Polychrome Jar by Carlos and Carmelita Dunlap is from a family from Santa Fe who purchased it over 25 years ago Indian Pottery of the Southwest Post Spanish Period [SOLD]
by