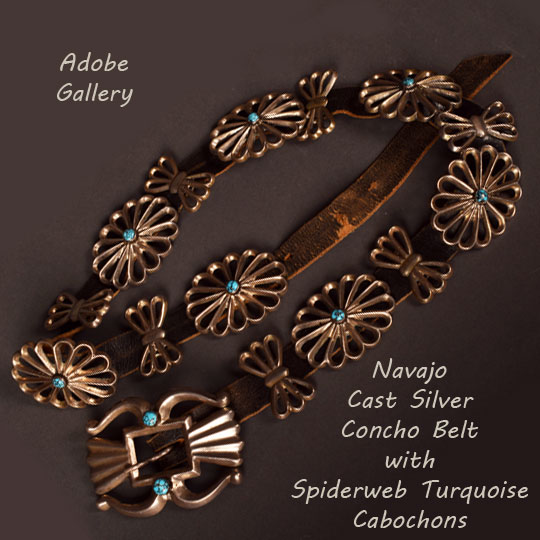 Concha is the Spanish word for shell. Originally, conchas were hair ornaments worn by the Plains Indians, made of German Silver, brass or copper. They were worn vertically by men down the back, attached to cloth or leather and as belts by women. At first, Diné acquired them though trade. Eventually when the Diné learned to work silver in the 1860s, they began to make their own conchas, and wear them as belts. The first known silver maker to make a concho belt was Atsidi Chon (Ugly Smith) in the late 1860s. By the 1920s, Diné silversmiths had added “butterflies” to separate the round forms and had begun to add pieces of turquoise to the sections.

This mid-century belt consists of cast silver conchas and butterflies. The casting technique requires the artist to melt silver and pour the molten metal into hand-carved molds made of tufa or sandstone. The unknown artist used the casting technique to create seven conchas, each with a small nugget of spider web turquoise set in the center. The conchas are separated from each other by seven cast butterflies. The belt has a wide buckle with two pieces of turquoise. The small size of the belt gives it a graceful, comfortable look. It was well crafted and the spider web stones add an elegant addition to the piece. The silver pieces are set on a belt of black leather which is about ¾” wide.

Condition: The Navajo Cast Silver Concho Belt with Spiderweb Turquoise Cabs is in good condition. All of the pieces, including the stones are intact. The black leather is gently worn, giving it a softer look and feel.

Provenance: From the estate of Frances Balcomb who passed it on to a daughter from whom we obtained it.  Mrs. Balcomb closed her Gallup Indian Art Gallery in Gallup, New Mexico in the 1960s and her Albuquerque gallery in the 1970s.  This was probably inventory which she put away.