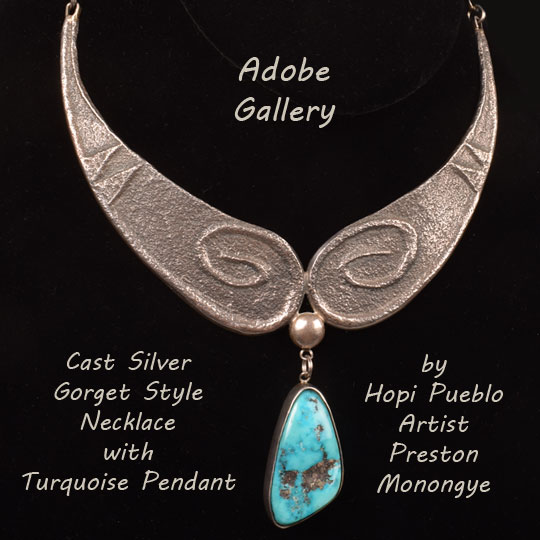 This silver casting by Hopi Pueblo artist Preston Monongye has the appearance of having been cast in sand.  The surface texture is a sandy finish.  The two tear-shape castings are attached at the bottom, making for a fixed, not flexible section.  A silver drop, placed at the base, is the anchor for the large beautiful blue turquoise gemstone.  The silver chain was handmade.  The silver backing of the turquoise bears the logo of the artist.

Preston Monongye has an interesting biography, which has been summarized by Greg Schaaf in his book on Native jewelers, as this:  “Preston Monongye’s jewelry is among the most sought after and highly valued of all Native American jewelry, rivaled only by his neighbor Charles Loloma, Lee Yazzie, and a small circle of other top artists. “His birth in 1927 remains shrouded in mystery.  In 1934 during the Great Depression, his birth mother, reportedly a California Mission Indian woman from Los Angeles, visited the Hopi village of Hotevilla on Third Mesa. For some unknown reason, she left little Preston with a powerful Hopi Wutsim Priest, David Monongye, and his wife Nora.  They adopted Preston and raised him as a Hopi.  Grandfather David once explained to me.  ‘Hopi is a philosophy, a way of life, meaning the ‘People of Peace.’  You may be red, white, yellow or black—it doesn’t matter—if you’re ‘Person of Peace’—you're Hopi. In this spirit, Preston was raised in a very traditional Hopi family who were fine artists: jewelers, textiles weavers, basketmakers, and wood carvers.

“As a child, Katsinas gave little Preston a bow, arrows, and a lightning stick, like other Hopi boys.  Preston was initiated into the Hopi Katsina Society.  While sitting in Grandfather David's kiva, he learned to carve and weave by watching Hopi priests.  Preston was nine when he helped Grandfather David melt silver coins to make jewelry.  He learned traditional techniques of Hopi silversmiths practiced by David and their neighbors, Ralph Tawangyawma, Dan Katchongva, and Allen Pooyouma.  They were known for silver ingot, hand wrought, heavy stampwork and twist wire jewelry set with high quality, natural turquoise.

Provenance: this Cast Silver Gorget Style Necklace with Turquoise Pendant by Hopi Pueblo Artist Preston Monongye is from a gentleman from Colorado