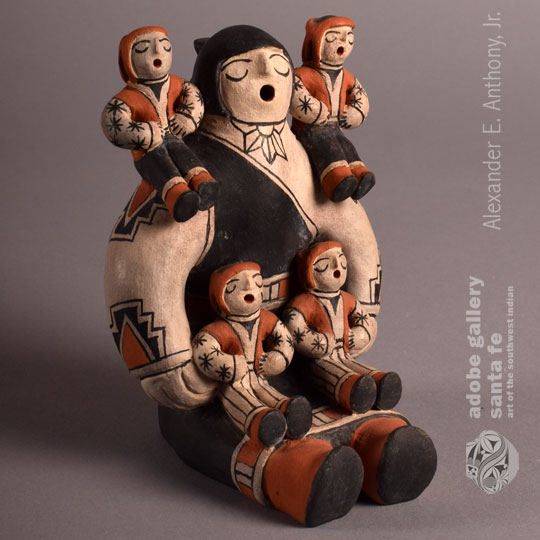 This Cochiti Pueblo Seated Female Pottery Storyteller with Four Children by Louis and Virginia Naranjo with her eyes closed and her mouth open is beautifully dressed in a highly-decorated blouse over which she wears the traditional pueblo dress.   She is wearing high-top moccasins. Her dress is covered at the waist with a belt. Each of the four young boys is fully dressed with long pants, a printed shirt and a headband. Each of the boys has his eyes closed and mouth open in the same manner as the adult.  The figurine was co-signed by Virginia and Louis and was made in 1995. Louis (1932-1997) and Virginia Naranjo (1932-2014) were standard bearers for the proud figurative pottery tradition of Cochiti Pueblo. They crafted their figurines at the kitchen table in their comfortable adobe home at the pueblo. They worked almost every day crafting their art with great care, joking and exchanging the gossip of the day as they went along, accompanied by television, children and grandchildren. Their art provided a good life for them and it provided a legacy that will be with us for another century or more.

Provenance: this LOUIS & VIRGINIA NARANJO Cochiti Pueblo Seated Female Pottery Storyteller with Four Children is from the collection of a client from Albuquerque