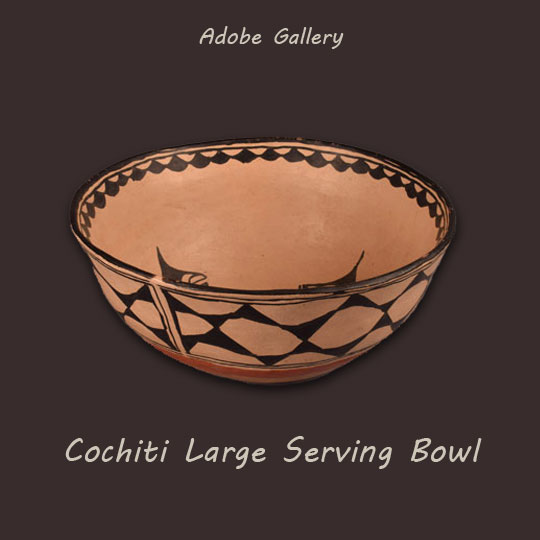 If you were ever invited to share a meal at a pueblo home, you would have seen vegetables or red or green chile stew served in a bowl like this Cochiti Pueblo historic pottery large serving bowl with cloud designs.  Such bowls grace the table at all pueblo meals. This late historic bowl does not evidence wear on the interior, so it was not likely ever used for serving food but perhaps was made and sold.

The interior design is a typical rain cloud presentation seen on many Cochiti vessels.  Cochiti is one of the pueblos which has no restriction on using water symbols on secular pottery.  The exterior design resembles a typical black triangle configuration most often seen on Santo Domingo pottery.   Below the design panel on the exterior is a wide red slip that has been wiped on in traditional pueblo fashion. The underside was left in the natural tan clay and finished by stone polishing.

It is estimated that the bowl dates to the end of the historic period, circa 1940s.