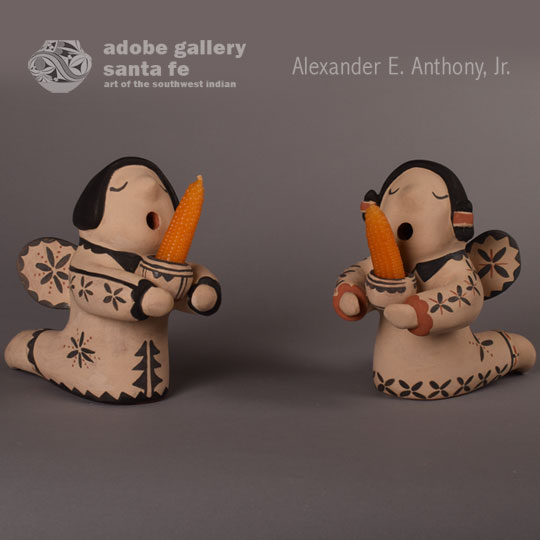 This pair of pottery angels, each holding a candle that is sculpted as an ear of corn, was made by Mary and Leonard Trujillo of Cochiti Pueblo.  Each angel wears a gown decorated with floral elements. Each angel is kneeling, eyes closed, and mouth open in song. Each holds a bowl in which is the candle.

Mary Trujillo (1937- ) was originally from Ohkay Owingeh Pueblo.  When she married Leonard (1936-2017), she joined him at his pueblo of Cochiti.  Mary and Leonard were members of Helen Cordero’s family. Leonard was an adopted son of Helen and Fred Cordero and Mary was Leonard’s wife.  Mary and Leonard Trujillo were among the premier figurine potters at Cochiti Pueblo. Very few potters attempted large figurines but the Trujillos did and they did a fine job at it. Mary learned to make storytellers from Helen Cordero.  Mary was one of the most accomplished potters at Cochiti. Leonard began assisting Mary in the 1980s.

Condition: this Cochiti Pueblo Pottery Angel Figurines Holding a Candle by Mary and Leonard Trujillo is in original condition

Provenance: from the extensive collection of Cochiti figurine pottery of a family from Albuquerque.