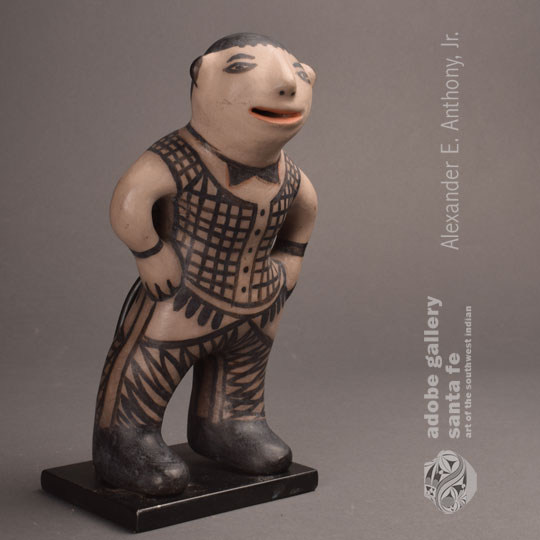 Ivan Lewis created this whimsical figurin in the hundred-year-old tradition of Cochiti pottery figurine makers.   It is of a man dressed in a checkered vest with buttons. He is standing with his hands on his hips leaning slightly forward.  As early as 1880, Cochiti Pueblo potters were providing hundreds of pottery figurines to satisfy a demand for “Indian curios,” a term coined by merchants in Santa Fe for “curiosities.”  It is not likely that the Cochiti potters dreamed up the scheme on their own but most likely that the merchants needed something unique, mysterious, ceremonial or perhaps just mockingly funny to sell to the influx of tourists arriving on the AT&SF rail line that made its way to New Mexico in 1880.

More than 100 years later, Ivan Lewis continued the tradition with this and other figurines.  Lewis was a talented potter, his paint always applied with a precise hand giving the character a lifelike personality.

Ivan Lewis (1919-2001) was born at Acoma Pueblo. He was the son of famous Acoma potter Lucy Lewis. He did not make pottery while living at Acoma. Only after marrying Rita Banada of Cochiti, did he begin making figurines. He worked in tandem with his wife as well as working alone. The figurine comes with a custom made stand that stabilizes the sculpture. It is signed on the bottom of the foot with the artist’s name and Cochiti Pueblo.

Provenance: from the collection of a family from Illinois who purchased it from Santa Fe dealer Richard M. Howard in 1993.