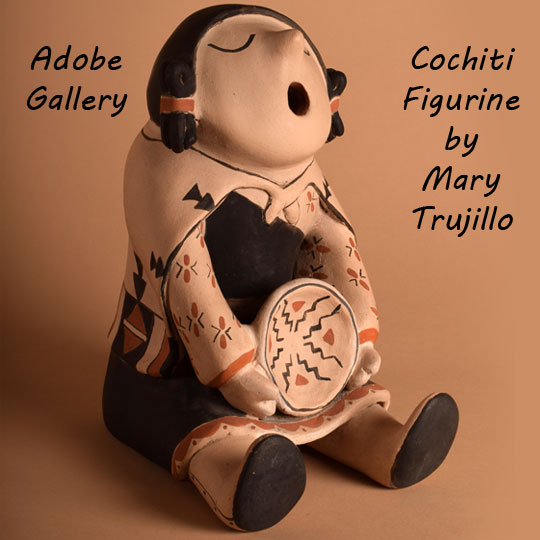 Cochiti Pueblo artist Mary Trujillo made this remarkable female pottery figurine holding a pottery dish or basket in the style of storyteller figurines but without children.  She wears a traditional black dress which she is wearing over a blouse with an elaborate floral pattern.  She is wearing a large cape over her shoulders that has embroidery designs on the edges.  Her black manta has a band of design at the hemline. Her eyes are closed, and her mouth open as if talking.  She wears traditional moccasins with simulated buttons up the side.  Her hair is tied in chonga-style on each side of her face.

Mary Trujillo (b.1937) was originally from Ohkay Owingeh Pueblo, the daughter of José and Leonidas Cata Tapia. Mary was mentored by her mother, who was an excellent San Juan pueblo potter.  When she married Leonard Trujillo, she moved to Cochiti and has lived there since. Mary soon switched from San Juan style pottery to Cochiti style, under the tutelage of Helen Cordero. Leonard was the adopted son of Helen Cordero.  Mary first made pottery figurines in the early 1980s.  She still lives at Cochiti but is no longer active in making pottery.

Provenance: this Cochiti Pueblo Seated Female Pottery Figurine Holding a Dish by Mary Trujillo is  from a resident of Seattle, Washington